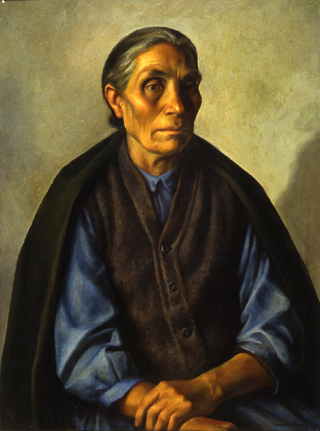 Long before New Mexico and even Colorado gained statehood (1912 and 1876 respectively), Benerisa Tafoya was born on April 18, 1876 to Maria Doloritas and Jose Tafoya. Benerisa’s mother was a full-blooded Indian--a member of the Com Ute tribe (Plains Indians)--who lived in a pueblo near Trinidad, Colorado. Her father was a Spaniard who migrated with his family from Spain and settled in Southern Colorado. Maria Doloritas was literally kidnapped from her parents and tribe at the age of 15 years. Maria Doloritas and Jose were married and reared four children. Benerisa, the oldest of her siblings, often assumed responsibility for her two brothers and one sister, and helped rear them when she was young. Later in her adult life, she endured working at highly labor-intensive jobs. She worked from sunup to sundown to support her own growing family.

Benerisa had five children of her own, three sons and two daughters. As she labored to provide for them, developing and refining certain skills, she became well known in the Taos and Ranchos de Taos communities for her art in adobe mud and mud plastering. Benerisa’s skill in determining the texture of the mud and its readiness, often using her bare hands to spread it the plaster, made her successful. She was considered an expert in this field by her fellow citizens. She plastered private homes in the community, including the one owned by Dr. Gertrude Light, and assisted with the annual maintenance of the exterior plastering of the famous St. Francis de Assisi Church (one of her favorite places as she lived nearby and worshipped there) located in Ranchos de Taos, and the Penitente moradas (chapel and chapter house of the penitente brotherhood) in the Ranchos area.

Not only was Benerisa actively involved in her community, but she proved to be a leader. She not only led the mud plastering of the church, but she also recruited people annually to assist in this community effort. Though she was among many men in annual plastering of the church, Benerisa was the most courageous of the group. She dared to climb the highest level at the front of the church, underneath the steeple bell, to complete the plastering. She certainly had an adventurous spirit to climb and stretch at these heights that reached at least two stories tall.

In her life time, Benerisa was also a devout and active Catholic which she demonstrated by consistently attending the morada services. She prayed at each station of the cross, prepared Lenten meals for the Penitentes during Holy week of the Lenten Season, and prayed the rosary with other church members for those who had passed on in the community (similar to Guadalupanas a Hispanic church group active throughout northern New Mexico). Benerisa also participated in the traditional Catholic processions during holidays such as Las Posadas (see PDF about this annual Spanish cultural Christmas tradition involving 9 days leading up to Dec. 25th) and always opened her home to visitors, offering homemade biscochitos (anise sugar cookies) baked in her horno (outdoor adobe beehive oven) on those meaningful occasions. Her culture and heritage was important to her and it is what defined her life.

Having acquired a quiet patience, a soulful stillness, and a tolerance for prolonged sitting in her later years, Benerisa became a well-regarded and most valuable model for Kenneth Adams--an artist and member of the Taos Society of Artists. In those days in the 1930’s, she earned fifty cents a sitting (equivalent of $20.00 today for unskilled labor) for posing for the artist. She was the subject for 12 oil paintings and sketches by Mr. Adams. Today, these significant portraits reside in the collections of several museums, including the Stark Museum of Art in Orange, Texas, the University of New Mexico Art Museum in Albuquerque, and the Harwood Museum of Art in Taos.

After her children were grown and had families of their own, Benerisa remained a pillar in their lives. As the years went by, she also enjoyed the company of her grandchildren and great grandchildren, sharing many stories, memories, values, work ethic, and a will to overcome adversity in the face of physical and economic hardship. Although she knew little English and did not have a formal education, Benerisa was fluent in her native Ute and Spanish languages. Being of strong mind and body, she maintained good health throughout her life but began to lose her eyesight within the last years of her life. She lived a quiet fruitful life despite the challenges of her era. As a woman, a member of a minority race, a single mother, and sole family provider in those days, she is regarded as a heroine and true survivor. Benerisa, a determined and strong- willed woman, died at the age of 102 in September of 1978, outliving two of her children.