Las Guadalupanas, Women Devoted to Our Lady of Guadalupe and St. Francis of Assisi

The Guadalupanas are an organization of women in Taos County and throughout northern New Mexico who pray and sacrifice for vocations to the priesthood and religious life through a devotion to Our Lady of Guadalupe and St. Francis of Assisi. Our Lady of Guadalupe is the Patroness of the Americas and has a devoted following among the Hispanic and Indigenous people of the Southwest. Her portrait, which is on a cloak of cactus fibers, miraculously appeared as the result of her apparition to San Juan Diego in Tepeyac, near Mexico City in 1531. St. Francis of Assisi is the Patron Saint of the Archdiocese of Santa Fe and has a devoted following among Catholics in the archdiocese. 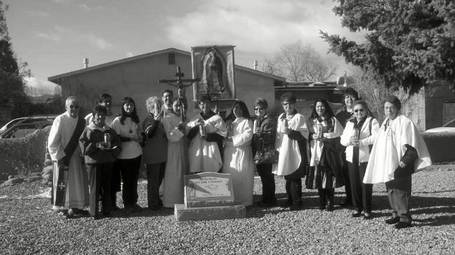 The Guadalupanas were originally created as a support organization for the Peregrinos (pilgrims), men and boys who in 1972 began walking in pilgrimage to El Santuario de Chimayo (Sanctuary of Chimayo, a masterpiece of Spanish Colonial architecture designated by the Archdiocese as a pilgrimage shrine). Since then, the Pilgrimages for Vocations have grown to include over 300 men and women who pray and walk in pilgrimage for vocations every year. The Santuario de Chimayo is a holy site in Northern New Mexico, with a rich history of curative powers. The church has been a pilgrimage destination for generations.

The pilgrimage registration process begins on December 12th, the feast day of Our Lady of Guadalupe. The commitment for all of the pilgrims involves the preparation of the mind, heart, soul, and body for the task of shared pilgrimage. The process for this twelve-month commitment to live as a pilgrim involves registration, orientations, meetings, retreats, parish ministry, practice walks and a Good Friday Pilgrimage. The spiritual aspects foster service and sacrifice, and pilgrims strive to grow in prayer and a deeper relationship with Christ.

The experience of this pilgrimage is unlike any other. There are many pilgrimages to holy sites around the world. However, this pilgrimage is not only the destination, but also the experience of preparation, and of walking together for a shared purpose. There is a physical element of pushing the limits beyond discomfort and pain, but at the same time being focused on prayer and being transformed as a faith-filled person. Prayer and sacrifice is at the heart and soul of this pilgrimage. Many men and women who take part as Guadalupanas and Peregrinos have spiritual experiences that change their lives. Many believe that miracles happen as a result of the sacrifice and prayers of the pilgrims. In order to understand the impact of such devotion, it is necessary to experience the pilgrimage in person. Anyone can watch the pilgrims along their routes, and be touched by the energy of the pilgrimage.

A different theme is developed each year, to foster a united spiritual focus. The theme for 2012 is: “Blessed is the fruit of your womb” (Luke 1:42). This year’s Mother’s Day Pilgrimage will take place on Saturday May 12th. There will be four different routes beginning at the churches of Las Trampas, Pojoaque, Cordova and Chimayo, all meeting at the Santuario for a closing mass which will begin at 9:30am. The 100-mile June Walk will begin on Sunday May 27th with the five routes meeting at the Santuario for closing ceremonies at 9:30 a.m. on June 2nd. The routes for the June Pilgrimage will begin in Albuquerque, Chama, Costilla, Estancia and Bernal. The women’s routes for 2012 will begin in Chama and Albuquerque.

Guadalupanas can be found in several parishes throughout Northern New Mexico. There are approximately 25 members in each of the parishes of Our Lady of Guadalupe in Taos and San Francisco de Asis in Ranchos de Taos. The surrounding communities of Taos Pueblo, Questa, Peñasco, Arroyo Seco and Cerro also have members in their parishes. In Ranchos de Taos, the ministries of the group have grown to include responsibilities that reach beyond their original role as Guadalupanas. This group meets monthly for prayer meetings and masses. They minister to their parish community with a prayer chain which includes any intentions requested of them. Their most important role in the community is accompanying and assisting families who have lost a loved one and praying rosaries as part of the mourning rituals.

To find out more about how to join the Guadalupanas and for more information on these pilgrimages visit: www.pilgrimagesforvocations.org