Taos potter Mary Beatrice Blake Witkop was born August 25, 1948 in Denver, Colorado. She was influenced early on by her mother who experimented with making pottery and her father who was a jeweler. Her mother collected pottery from the pueblos of New Mexico including pieces by San Ildefonso Pueblo potter Maria Martinez exposing her in childhood to the beauty of traditional Pueblo pottery. 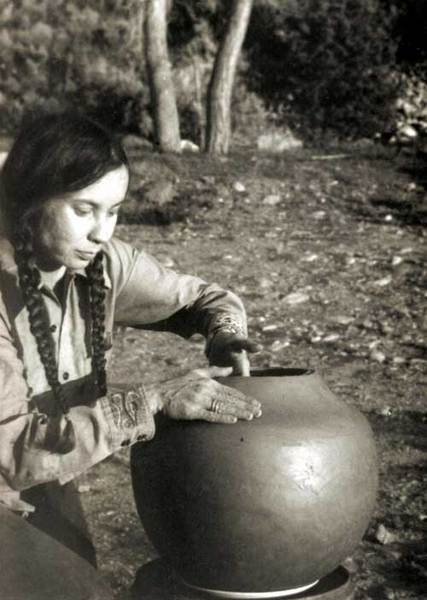 As a young girl her main interest was horses, she got her first horse when she was 13. She raised, trained and rode horses for the rest of her life. She was an avid downhill skier who spent a couple seasons working at Crested Butte and Arapaho Basin Ski Area in Colorado. Mary also enjoyed writing and published several poems.

In 1969 while attending college at Colorado State University, she met self-taught potter, Carl Witkop. A class on pre-Columbian art sparked her imagination, and she began experimenting with making her own pottery using the ancient methods of coil building, stone burnishing and pit firing. With the encouragement of her soon-to-be husband Carl Witkop, who had been experimenting with pre-Columbian techniques for a few years, Mary became a dedicated artist. Together, developed a new style of pottery based on ancient methods, pottery unlike anything else being done at the time. In 1971 Mary entered her first art show and won 2nd place from The Poudre Valley Art League’s Eleventh Annual Regional Art Show in Fort Collins, Colorado for her piece titled “Some People See the Grays”. This recognition put her on track to experiment with new designs and enter more shows and win more awards. Also in 1971, the couple exhibited their work at the Colorado State University’s Student Center Art Gallery and at the Foothills Unitarian Church in Fort Collins.

At this time period while firing pots on the lawn of her brother’s home the Witkops made an accidental discovery. Their original technique was to get black ‘clouds’ while firing pots in the open using cow dung. When a pot was accidentally dropped onto the grass, something magical happened. If organic materials were tossed onto the pots while they were still hot, they produced unique markings. Thus began their experimentation with other materials such as horse-hair, leaves, feathers and sawdust. By 1974 most of their pots were fired using this newly discovered method. They named their new firing technique ‘Cloud Fire’. The influence of this method can be seen all over New Mexico today; many of the potters that use the technique known as Horse-Hair pottery know little of this history.

Trips to New Mexico allowed the couple to visit various Pueblo artists exchanging ideas and techniques with well known potters such as Blue Corn of San Ildefonso Pueblo, Phyllis Tafoya, Glenda Naranjo, and Mela Youngblood of Santa Clara Pueblo, Rebecca Lucario, Marie Z Chino and Lena Zorivis of Acoma Pueblo, Jennie Laate of Zuni, Lucy Year Flower, Joe and Thelma Talachy of Pojoaque, Ruth Keyona of Laguna, and Rose Romero of Jemez Pueblo.
In 1974 they took home 1st Place in the Rio Grande Pottery and Sculpture Exhibition in Albuquerque. Other awards included 1st Place at the New Mexico State Fair in 1978, and Best of Show at the Santa Fe Arts Festival in 1980.
In 1975 Mary made the decision to be a potter full time, leaving her career as a research scientist. The couple moved to New Mexico purchasing a home near Taos. They were attracted to Taos, like others who had come before them, by the beautiful mountains, culture, people, and the flourishing art scene.

Their first exhibit in Taos was in July 1976 at Clay and Fiber Gallery. R.C. Gorman attended the opening to meet the newest members of the Taos art colony and added Mary’s first experiment with corrugation as a design element to his own personal collection. Throughout the 70s, they were kept quite busy supplying several galleries around the country that were exhibiting their work. They were both included in the 1977 Invitational Exhibition of Contemporary Ceramics in NM, and in 1978 Central Iowa Art Association’s The Ceramic Collection exhibition.

The Witkops became valuable members of the community teaching workshops, sharing their techniques of making and firing pottery in this unique style. Workshops were conducted at Ghost Ranch and at the Taos Art Association. The film ‘From the Earth Rising’ by Neil Productions documented the artists at work (all known copies of the film have been lost).

After a separation from Carl in 1981, Mary began experimenting with micaceous clay collected in the Taos area. She also began working with Taos Pueblo potters such as Jeri Track, Juanita DuBray, the Track sisters Bernadette, Soge and Dahl, Henrietta Gomez, Cheyenne Jim, and Anthony Durand, exchanging ideas and techniques, learning from them how to prepare and work with the local clays. She encouraged new potters to experiment and develop their own styles. She was adamant about signing their pottery. Through the years Mary signed her pottery with her name and the place she made it, El Salto, Pilar or Ranchos de Taos, thus creating a timeline as well.

In 1987 she met David Hopper, beginning a relationship that lasted 23 years. David was a local contractor specializing in adobe construction and also owner of the Return Gallery of Taos (1976-1984). She moved her studio from Pilar to the Old Ranchos Post Office, which was owned by David’s brother Dennis. Dennis Hopper had met Mary years earlier and had already become a collector of Mary’s work. His collection grew considerably over the years as Mary paid her rent in pottery.

Taos provided Mary with a wealth of other artists with whom to collaborate. The most successful of these collaborations was with Taos Pueblo stone sculptor, John Suazo. They did many pieces together over the years with Mary building the pot, John doing the carving and then sent back to Mary to apply the final burnishes and firing. Other artists that she collaborated with included jewelers Larry Herrera and Pepé Rochon.

Mary also enjoyed collecting art from the many Taos artists she met, helping not only with financial support but her love and encouragement. She took an active role in the Taos community by promoting art, and preserving the environment. During her years in Taos she taught numerous pottery classes: she was always willing to teach someone who wanted to learn. Mary became mayordoma (irrigation ditch boss) of the Pilar Acequia Association for 5 years, and served as Taos County Art Commissioner from 1991-1992.

Mary was a favorite participant of the Pilar Studio Tour since its inception in 1996. People loved coming to meet her, to hear the stories she had to tell and of course buy a piece of pottery from the artist herself. Mary often said that she would rather give a pot to a friend than sell one for a great deal of money. Many of her friends who were celebrating a graduation, marriage, or even a birthday through her great generosity own a piece of her work. As part of the age old Taos barter system she even traded pottery for many of things she needed, (like it or not her pottery became a commodity in the community).

As an invitee to the Taos Fall Art Festival's ‘Taos Invites Taos’ she won best of Modern Pottery 12 years in a row (1998-2009), in 2003 she took both the Best of Modern and Traditional Pottery awards. After 2009 she asked the awards committee to stop giving her the award and to give someone else a chance, (that was Mary as some of us knew her).

Mary passed away April 13th, 2010 in her studio. She worked right up until the end, leaving several pieces unfinished. Her funeral on a hillside overlooking her first Taos studio was well attended by all members of the community. An unprecedented gathering of all the cultures of Taos joined hands to say goodbye. Someone was overheard to say: “Look at all the people she’s brought together, she could have been Mayor.”

By Juanita Witkop and Robert Cafazzo

This year, as part of the celebration “The Remarkable Women of Taos,” Two Graces Plaza Gallery in Ranchos de Taos will host an exhibition – “The Pottery of Mary Witkop”—scheduled for May 25, 2012.