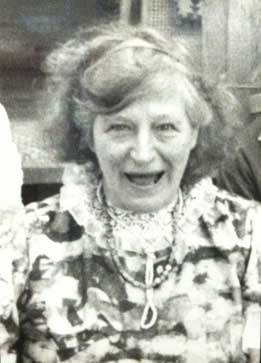 The picnic at Frieda’s was a tremendous experience. At first, I heard a huge, bellowing laugh from the basement—then the floor begins to quake—then she APPEARS!...You should see her. Still magnificent. A valkyrie. She runs and plunges about the ranch like a female bull—thick yellow hair flying, piercing blue eyes—huge. She dresses madly—a hat & coat of bob-cat fur. – Tennessee Williams, 1939*

Maria Frieda Johanna Baroness von Richthofen was born into an aristocratic family in Metz, Germany. In 1899 she moved to England after marrying the much older, Ernest Weekly, professor of French at the University College, Nottingham. After giving birth to three children, Frieda met the author D.H. Lawrence in March 1912. Two months later the couple eloped to Europe. Scandalized by a married women leaving her children, the British public judged Frieda harshly. She later wrote about how it was for her to leave her children for the love of Lawrence:

The price I had to pay was almost more than I could afford with all my strength. To lose those children, those children that I had given my life to, it was a wrench that tore me to bits. Lawrence suffered tortures too. I believe he often felt: have I really the right to take this woman from her children?

After marrying in 1914, the Lawrences returned to England. At the outbreak of the First World War the authorities became concerned that Frieda, distantly related to the “Red Baron” Manfred von Richthofen, was a spy. The couple settled at Zennor in Cornwall, but local people reported that the Lawrences were using the clothes hanging on their washing line to send coded messages to German U-boats. After searching their cottage, the authorities forced the Lawrences to leave the area and confiscated their passports.

As Frieda later wrote, Lawrence wished to write a novel about every continent. He managed to travel to three of them: Europe, Australia, and North America. In 1919, after British authorities relinquished the Lawrence’s passports, he and Frieda commenced their travels. They departed England, stopped in Germany, and eventually landed in Sicily. In November 1921, while the couple was living at Fontana Vecchia (“Old Fountain”) in Taormina, D.H. received a letter from Mabel Dodge Luhan inviting him to come to Taos.

After a side trip to Ceylon and Australia, the Lawrences finally arrived in Taos on September 11th, 1922 –D. H.’s thirty-seventh birthday. Both were struck by the beauty of the landscape, as Lawrence would later write: “In the magnificent fierce morning of New Mexico, one sprang awake, a new part of the soul woke up suddenly and the old world gave way to the new.”

Frieda echoed her husband’s words in her memoir, Not I, But the Wind: “A new life for us – and we began it straight away. Out from the pueblo to the east of us, a few miles away, came the feel of the Indians, so different from anything we had ever known.”

Mabel had called Lawrence to Taos because she thought he could write up her utopian vision. She was thrilled when he asked her to collaborate on a book:

He said he wanted to write an American novel that would express the life, the spirit, of America, and he wanted to write it around me--my life from the time I left New York to come out to New Mexico. To take my experience, my material, my Taos, and to formulate it all into a magnificent creation.

The next day Lawrence came to Mabel's home to begin their joint venture. This beginning, seemingly full of promise, came with a foreshadowing of what would transpire. Lawrence wasn't sure how Frieda felt about their collaboration. "She won't let any other women into my books." The next day he informed Mabel: "Frieda thinks we ought to work over in our house." When they arrived there, Frieda "stamped round, sweeping noisily, and singing with a loud defiance." This incident sparked a long-lasting rivalry between the two women.

While living at one of Mabel’s guesthouses, Lawrence wrote several prose pieces and poems including "The Wilful Woman," a short story about the journey that brought Mabel to Taos. By November, due to their hostess's overbearing ways, the Lawrences sought other quarters. They lived at an abandoned ranch twenty miles north of Taos.

Frieda and D.H. spent contented months at the ranch and in parts of Mexico in until 1923 when they returned to England. One night Lawrence hosted a dinner at a London restaurant. He spoke about starting his utopian Rananim colony in New Mexico and asked his friends to join him. Only painter Dorothy Brett showed any interest. In April 1924 she arrived in Taos with the Lawrences. For a while the party stayed with Mabel until some disagreement arose that made Frieda express the need for a place of her own. In her desire to have D.H. stay in the area, Mabel offered to give him the 160-acre Flying Heart Ranch which she had purchased in 1920. Not wanting to be beholden to Mabel, D. H. asked that Frieda hold the deed, and offered the original autographed manuscript of Sons and Lovers in exchange.

We all worked so hard. Brett, straight from studio life in London, was amazing for the hard work she could do. One day we cleaned the spring and carried huge stones until we nearly dropped. We all did it for very little money for we didn’t have much.

Lawrence painted the doors and windows and made cupboards and chairs. Frieda cooked huge meals. She baked bread and cakes in the outdoor Indian oven. The Lawrences acquired livestock: four horses, a cow they named Susan, and some Leghorn chickens. Frieda made butter in a little glass churn. She also made buttermilk which made their chickens thrive. Lawrence irrigated and wrote; he collaborated with Brett on some paintings and helped Frieda with her “poor attempts.” The three spent a wonderful summer working, riding, painting, and hosting visitors.

That fall the Lawrences returned to Mexico City, saw friends, then settled in Oaxaca where Lawrence wrote, then became very ill. Frieda nursed him until he was well enough to return to Mexico City. An examination by Dr. Uhlfelder there revealed that Lawrence had “T. B. in the third degree” and was only give a year or two to live. The doctor advised Frieda to take him to the ranch. The combination of the high clear spring air, warm sunbaths and Frieda’s loving care restored Lawrence’s health. Lying outside on his little sun porch, he started writing his play, David.

In the fall of 1925 Lawrence became restless. He wished to return to the Mediterranean. His publisher, Martin Secker, suggested Spotorno, on the coast not far from Genoa. Lawrence lived for another five years. He died of tuberculosis at the Ad Astra sanatorium in Vence, France, on March 2, 1930 at the age of forty-four. In 1944 Frieda paid tribute to her husband, whose reputation and work she promoted the rest of her life.

I am grateful that I could see him back into the earth that he loved. He had made me his wife in the fullest meaning of the word, and more; he had given me his very self to keep….He died unbroken; he never lost his own wonder of life. He never did a thing he did not want to do and nothing and nobody could make him. He never compromised with the little powers that be; if ever there lived a free, proud man, Lawrence was that man.

Four years after Lawrence’s death, Frieda published her memoirs of her husband in Not I, But the Wind. After a lengthy review in the New York Times on October 14, 1934, the critic wrote that she presented a more natural Lawrence. Through the use of letters he had written to her mother, Frieda had succeeded in humanizing her husband. Referring to Lawrence’s body of literary work, the last line of the review read: “After the poems, novels and letters, this is the book to read.” With that, Frieda received recognition for her own writing, with more to follow.

Frieda’s connection with New Mexico writers led to a brief stint as an editor. In 1933 American poet, novelist and academic Haniel Long had helped found the Writers' Editions, a Santa Fe-based venture incorporated for publishing works by Southwest writers. Long edited the literary page of the short-lived New Mexico Sentinel. From 1937 to 1938 he produced the weekly column “New Mexico Writers.” On the page’s masthead Long listed his four associate editors. Three of them—Witter Bynner, Erna Fergusson and Paul Horgan—were already well known Southwest writers. The fourth was Frieda Lawrence. In the background as an editor, she nonetheless wrote “In Praise of Raymond Otis” (1938) about the author who had helped found Writers' Editions. Frieda considered Otis, who wrote three novels set in New Mexico, among “the small army of men who are capable of conceiving a better world.”

By that time Frieda had resumed residence at her beloved Kiowa Ranch (named for an ancient Indian trail that ran through the property) with the Italian Angelino Ravagli, who would become her third husband. He had transported Lawrence’s ashes to Taos for their burial at the ranch. Since Mabel had tried to steal them, Frieda had them mixed into the cement floor of the shrine she built to Lawrence. From that time on, the ranch drew Lawrence fans and scholars. On his visit in 1939 , when Tennessee Williams signed Frieda’s guest book he noticed names of famous people like the actresses Marlene Dietrich and Lillian Gish, and writer Aldous Huxley. Through Frieda, Williams met Dorothy Brett, Mabel Dodge Luhan, writer Frank Waters and other Taos residents.

Throughout World War II and into the 1950s, Frieda underwent further political persecution. Her German heritage and Ravagli’s Italian citizenship subjected them both to suspicion and harassment from the U.S. government. Seeking relief and some peace, they stayed in Mexico for a while. When they returned the couple spent summers at the ranch and winters at a lower elevation in El Prado, a community 3 miles north of the Taos plaza. Frieda married Ravagli in 1950, not for romantic reasons, but to protect his immigrant status. Two years later Frieda traveled one last time to England to visit her children and meet her grandchildren. She died of a stroke at her El Prado home in the early hours of her birthday, August 11, 1956.

Frieda’s legacy: A year prior to her death, Frieda gifted the ranch to the University of New Mexico. Now known as The D. H. Lawrence Ranch, it continues to serve educational, cultural, and recreational purposes. She had been working on her autobiography titled "And the Fullness Thereof," which was published posthumously in 1964 as Frieda Lawrence, the Memoirs and Correspondence. Frieda gifted her papers and those of her husband to the Harry Ransome Center at the University of Texas at Austin.

For more information on the Lawrences and their ranch, go to www.friendsofdhlawrence.org/outline.html

* Thanks to Nita Murphy at University of New Mexico-Taos’s Southwest Research Center for the Tennessee Williams quote and information.

Photo of Frieda in her later years by artist cady Wells, from the New Mexico Museum of Art.