This essay on Patricia Sanford, was written by her husband, Philip Bareiss, used with permission of Paul O’Connor. 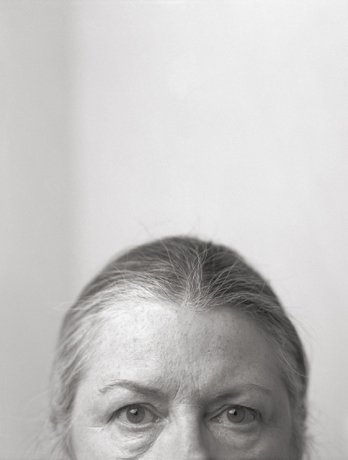 The Paul O’Connor portrait of Patricia irritated us when we first saw it years ago. The half view seemed half done, unfinished. Heck, she was slipping off the bottom of the page. Years later, we noticed how the photograph had changed. Or we had.

Back then Patricia physically immersed herself in watercolors, sinking in so deep she had to create an apparatus to support herself and her equipment. The paintings were massive—way beyond the capacity of her easel. The works were five by three and a third. Some were multiples, maxing out with her Portrait of Taos Mountain at five by 13. She built herself a water table that was large enough to hold giant sheets of paper placed in a few inches of water and strong enough to hold her up as well. She would climb up into the thing, ease the delicate dripping sheets out over the edge onto a three-quarter-inch panel of plywood. Then she would have to get herself out of the contraption to staple and stretch the paper. There it would dry, tense and flat, ready for the paint.

Our trips to Lake Powell back then were guilty pleasures. You immerse yourself into pure colors of the royal blue lake surrounded by the harsh reality of parched-desert yellow, burnt red iron oxides cascading off the towering cliffs all around and the flat immensity of the blue above. The place has diamond hard beauty. The temperature climbs well over 100 degrees. Yet the Colorado River is too cold for lingering in. Too cold. Then too hot.

The people who lived here before the dam struggled in this place—their home sites and their memories are now buried deep by the flood. We, in our bathing suits accompanied by margaritas, could never quite forget the past. We float hundreds of feet above it all thanks to the environmental crimes that make Glen Canyon’s cultural and geological bounties a mythic treasure today.

The place is unreal. Unearthly enough for location scouts to find a home for the Planet of the Apes in the ’60s—clear and pure enough to inspire Patricia’s series of watercolors about water. In one painting Patricia dissolves in blue, floating on her back. She appears more determined than restful. I recall how the little fish trying to survive in this wet desert would vainly nibble on the hairs on my legs. I ask myself: “Was she feeling their bites?”

Art looms up around Lake Powell. Henry Moore sculptures turn up in natural rock formations; Nitsch porings of blood and paint drip sky high off the cliffs; Bell’s vapor works glitter on the surface of the water. If Duchamp had seen this place, he would have put his urinal back in the closet, depriving the world of Ready Mades—and DADA its founder.

The land and sky of the American West have inspired and often crushed many an artist. Patricia took it on in her work. Pure and bold where traditional fine motor skills aren’t enough. You have to work from the shoulder with the whole body—cover enough ground before the paint dries.

Artist Ron Davis likes to quote Barnett Newman: “Painting is easy. It’s just about color and where to put it!” Something like that. No. Not for a watercolorist like Patricia. The real game was in the paint itself, how the pigments work in the water, suspended, staining, and slowly changing—how the pigments mix and combine.

She immersed herself in a glittering ocean of blue, just like she found it. After a week of coming home from her studio cranky, even discouraged, she arrived one evening chipper and cheerful. “I had a wonderful day!” Thinking she had solved a problem with composition, I asked: “Did you finally finish the piece you were working on?” “Much better than that,” she goes. “I spent the whole day cleaning my pallet, preparing my pigments, and mixing my paint. Now I am ready to go!”

A watercolorist of scale—for her the medium is the message.

A few months ago Patricia rediscovered the portrait Paul made. Times had changed and so had the photograph, to us. “It looks like Kilroy Was Here,” she said, alluding to factory workers who used to make cartoons on ordinance bound for Germany during World War II. “It is weirdly prescient showing me now between two worlds, part here, part there.”

by Philip Bareiss in Taos Portraits: Photos by Paul O’Connor