by her daughter, Carole Crews, used with permission of Paul O’Connor 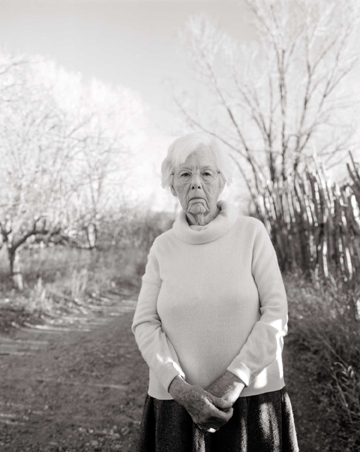 Growing up on a windy Texas panhandle ranch during the Depression, my mother longed for culture, a feeling fueled by the literature she read voraciously. Mildred never lacked courage, and as she described in her book of photographs, Among the Taos Moderns, she sought new experiences to feed her fascination with art, culture, and the creative process, and was led, through luck and intuition, to not just admire artists but to become one.

Mildred arrived in Taos at the age of 19, having already fallen in love with its landscape, people, and artistic ambiance through frequent childhood visits. Martin Schaeffer employed her in the only photographic studio in town and she enjoyed life as a young, single woman. Whenever she arrived at the old Sleeping Boy bar with the big wooden dance floor, the band would break into Begin the Beguine especially for her.

After World War II began, her employer left and so did she, first to Denver, then to New York City, where she was able to learn more about photography and meet a circle of artists, some of whose portraits she made. As is often the case when one passes their mid-20s, a longing for a true home and family emerged, and the next time Mildred returned to Taos the opportunity presented itself.

My father, Judson Crews, as an actively publishing poet, knew two of the subjects my mother had photographed in New York City, so when he saw them in a window display advertising her work, he gave her a call. They had enough in common to get married only a few months later, with Bea and Louis Ribak standing as witnesses.

Although they tried life in New York City as a couple, they decided to settle in Taos just before my older sister, Anna Bush, was due to be born. In the rambling old adobe house on Valerio Road, they indeed made a home, complete with the flower and vegetable gardens that Mildred cultivated so well, and plenty of space for guests and the modern paintings they collected.

The darkroom was primitive, with water pulled up by bucket from the well in the back yard. I remember sitting quietly in the dim red light listening to her count the seconds the negative needed to stay in the enlarger, and watching excitedly as the image appeared in the developing tray.

Their home became a magnet for Judson’s literary connections and the local modern art community. Mildred’s warm smile, home brew, and fine food made their parties legendary, although occasionally she referred to herself as “the hostess with the mostest” in a weary way.

One day, out of the blue, Mildred got the inspiration that she, Judson, and our friend, the poet Wendell Anderson, should collaborate on a book honoring Patrocinio Barela, an outstanding local woodcarver whose sculptures were once selected for a show in New York. They worked on the project for at least a year, with Mildred taking photos, Wendell transcribing Barela’s words into poetic form, and Judson printing the pages after hours in the print shop of the El Crepusculo newspaper, where he worked.

In 1960, we moved into an early solar house in the desert, closer to town, and had fewer parties. A midlife “is this all there is?” angst had set in for Mildred, although she took us on many trips—camping, to New York City, to Mexico at Christmas time—leaving Judson at home with quiet time to write. Eventually they decided to leave Taos so my father could get better jobs and put to use his master’s degree in psychology and sociology. Mildred went back to college and finished her own degree in English literature, leaving Judson to move to Zambia with Anna Bush for a teaching job.

With a Wurlitzer foundation grant for writing, Mildred returned to Taos alone in 1974. When she picked up a camera again, it was to take enigmatic color shots of natural subjects, such as streams and red willows. Independent until the end, Mildred shone in old age, and felt that her life was a success after all, especially when public recognition for her photographic work arrived, thanks to being rediscovered and given a show by painter Tony Abeyta. Many of the paintings that Mildred acquired—mostly through trades—as well as thousands of her negatives, are now in the hands of the Harwood Museum.

by Carole Crews from Taos Portraits: Photos by Paul O’Connor