On December 2, 1905, Hattie was born to William Carstens and Marie Menee Carstens in Tottenville, Staten Island, New York. She lived the first twelve years of her life there with her parents and three siblings, all of whom learned to play musical instruments at an early age. Hattie’s instrument of choice was a Gibson mandolin that she played until late in her life. When her mother contracted tuberculosis, the children were sent to live with relatives or friends. Hattie became the foster child of Mabel and George Travis, family friends, and went with them to live in Albuquerque, New Mexico because George was drafted to serve in World War I and began his training in New Mexico. 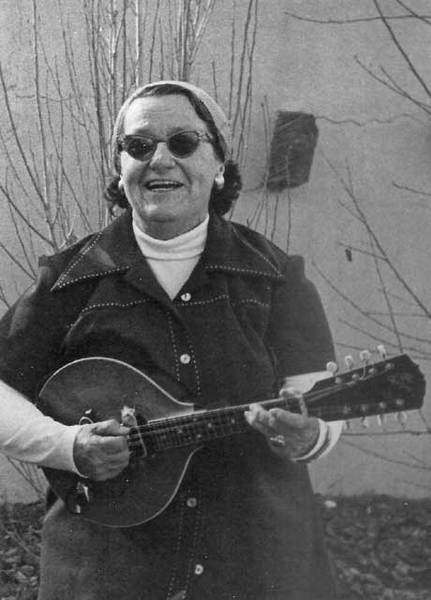 “Uncle” George and “Aunt” Mabel fell in love with New Mexico and after the war, they moved to Taos where they became traders of Indian goods, ran a curio shop as well as other businesses. At the young age of 16 or 17 years, Hattie worked for Doc Martin in what is now the Taos Inn. She also found opportunities to play music with other musicians for local dances. It was at this time that she met Eduardo Trujillo, who would escort her home after dances at night. They fell in love and decided to marry, but first her foster parents, reluctant to approve this match, sent her back to New York where her father said she would have to earn the money for her trip back to New Mexico. In time, she did earn some money for the trip and was helped by her husband-to-be, who arranged for the driver who was bringing a maid to New Mexico for Mabel Dodge Lujan to bring Hattie, too. It must have been a very long trip in 1922, but Hattie, well known for her determination, did arrive in Taos and married Eduardo Trujillo.

Ed and Hattie raised three children, first in Santa Fe and then in Taos (Dolores, Edward, Jr., and Albert Ralph (Corky)). During this time and as well as later, Hattie played with many groups, among them, the Sycopaters (her first), the Mish-Mash with Harry Simms, Floyd Morrow and Dr. Muller, and Las Palomas (a duo with Jenny Vincent) which later became “Los Taosenos” and later, the “Trio de Taos”, with Nat Flores on guitar.

Over the years, The Trio de Taos won many awards, including Best Traditional New Mexico group at the State Fair in 1983. They were invited to play for at the Colorado Springs Fine Art Museum and at the Fall Fiesta at Las Golondrinas as well as for First Lady Rosalind Carter in Albuquerque and for the Rio Grande Gorge Dedication. For many years, they entertained at the Taos Fiesta. The group made a CD titled “Musica Para Una Fiesta”.

Hattie was well known in Taos, not only as a wonderful musician, but as a friend with many good stories to tell and a great sense of humor. Besides the annual Taos Fiesta, Hattie enjoyed taking road trips with her husband to take in the wide sweep of Northern New Mexico’s landscape, especially the aspens in fall. The Bent Street Deli and the restaurants at the Sagebrush Inn and the Kachina Lodge numbered among her favorite eateries. Hattie loved music, her family and Taos above all.