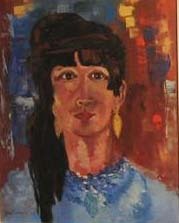 Dora Kaminsky was born in 1909 in New York City, and entered the Educational Alliance Art School for gifted children at the age of eleven. This was the first stage for a life of education, travel, art, and privilege. She went on to study at the Art Students League of New York. In the 1930’s she traveled and studied extensively throughout Europe. Her adventures took her from Paris and Vienna to Munich and Stuttgart Germany. To earn money for art supplies she would pose for artists and sculptors. She was a staff member of the Brooklyn Museum for three years, and worked as an arts and crafts counselor for summer camps. One of her major contributions to the arts was to help create The National Serigraph Society in 1943, an organization she was a member of for thirteen years.

In 1944 she headed out west to a place she had heard of called Taos. Her first visit was just for the summer in which time she created over 70 watercolor paintings and drawings. Dora would return every other summer until moving here permanently in 1954, and in the summer of 1955 she traveled to and maintained a studio in Delphi Greece. In 1956 and 1957 she was awarded a Wurlitzer Foundation grant, she produced many serigraphs during this time. Her travels also took her to Hawaii where she did many pastel drawings of ocean life.

Upon returning to Taos she would meet and marry the famous Russian painter Leon Gaspard in 1958. After his death in 1964 she would remain on his estate and promote his work, arranging two memorial exhibitions, one at the West Texas Museum in Lubbock Texas, and at the New Mexico Museum in Santa Fe. Dora continued her travels to exotic areas of the world in1972 and ’73 she visited Ethiopia, India and Ceylon.

Dora’s art style ranged from realism to abstractions, and her medium choices were just as varied, from oil and watercolor paintings to ink and pastel drawings as well as serigraph prints and collage’s. Her life was “extraordinarily active and broad in scope”, much like the artwork she created. Her artwork has been exhibited at the Honolulu Academy of Art, the Metropolitan Museum of Art, and the Southwest Museum in Los Angeles as well as here at the Taos Art Museum. Interested in bridging the gap between world cultures, her artwork has become “meaningful human documents, relating to one another.”

Image is a self portrait by Dora Kaminsky from the Taos Art Museum collection.