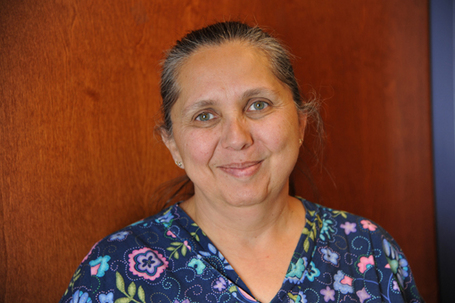 Annette has successfully raised three of her five children while working as a paramedic and a nurse. Her other two children are still at home finishing high school. They are 15 and 17 years old. She began as paramedic in Taos County in 1985 and began nursing school when her youngest son was in the first grade. She says “I worked for the Taos County Ambulance for 15 years I’ve also worked at Taos Clinic for Children and Youth. Now I’ve been in the emergency room at Holy Cross Hospital for almost 20 years, since 1993.”

She says, “It doesn’t matter how long it takes to get to where you want to go in life or if you have a dream, never give up. Pursue your dreams. I figure I have the rest of my life to finish what ever I hope to accomplish.” Annette hopes to be an inspiration to her kids. She is currently working on her BSN. She has been taking one class at a time for a few years and hopes to finish by December. “Who knows maybe I’ll continue my schooling and get a master’s degree,” she says. Her daughter Raynelle is following in her footsteps and is an EMT and currently taking classes for her RN.

Growing up in Questa on her family’s farm, Annette has also cared for many animals through the years. She says “I grew up ranching and I love it. It’s part of who we are.” Annette, her husband and their children raise animals along with the hay to feed them. “I’ve always been an outdoors person. But I especially love being in the mountains and going fishing. Everything is here, in Taos, for us,” she says. “There’s so much to do here – there’s skiing, biking, hiking, and plenty of sunshine.”