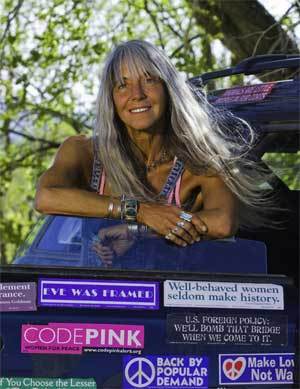 Josie Lenwell is in many ways a Renaissance Woman; her prodigious energies, interests and sense of justice have been the driving forces behind a life lived out loud. Besides her 38 years as a practicing psychotherapist, helping families and children, she is an amazing photographer, adventuring into the wilds as well as the cities, turning her pieces into beautiful, colorful kaleidoscopes of fantasy, with a sensitive eye and heart for nature. Her photographs, design and essays have been included in numerous publications including: NM Magazine, The Village Voice, Peace Work Magazine, The Progressive Magazine, NM Treasures, Enchanted Homes, Five Magazine and Bark Magazine’s latest book entitled Dog Joy.

Josie has been an activist for as long as she can remember, promoting peace at every turn and dedicated to making people aware of the dishonesty of wars and the politics that perpetuate them. You may have seen her on CNN or Channel 7 news making a citizen’s arrest of Karl Rove for war crimes or in Time Magazine and Newsweek with her Code Pink sisters demanding that AIG give the people their money back or in the Village Voice dancing the “Yes We Can-Can End War” at the 2008 inauguration. She is always seeking peace and justice and the well-being of all humankind.

Born in Wash. DC in 1949, she grew up in Northern Virginia. She attended VA Tech and the University of South Florida, graduating with her MA in Rehab Counseling and Psychology in 1973. She initially worked with the Division of Youth Services in Tampa, Florida. In 1975 she moved to San Francisco and spent the next 17 years developing her therapeutic skills and artistic pleasures. Her professional work in the field of mental health has included staff or consulting positions with mental health centers, hospitals, rehab clinics, colleges and universities and 30 years in private practice.

Her first visit to Taos came in 1990 and she was taken by the light, and the creative and independent spirits that inhabited Taos. After an unexpected neck surgery in 1993, she decided that life was unpredictable and it was time for an adventure to a new and mysterious land. She chose Taos. Within a year of starting her private practice in Taos, she began some of her landmark work in the field of child sexual abuse becoming the Clinical Director of the Child Sexual Abuse Program for many years.

Taos has provided Josie with the opportunity to create a wonderful home, a “castle of fantasy”, which houses her own art from years of creative pursuits, including stained glass, tiles, book arts, silk painting, mixed media and photography. It is also her therapy studio, providing a creative and nurturing space for her clients. When you walk around Josie’s home, you are in amazement of the talent and the whimsy she possesses, and with which she makes magic. As a dedicated animal lover, she has a menagerie of beloved “beasties” who adore her and inspire many of her artistic pursuits.

As you might expect, Josie most admires the strong characters and personalities of such individuals as, “Ruth Gordon (actress – “Harold and Maude”); Marc Chagall (painter) and Howard Zinn (historian – author of “A Peoples History of the United States”) for their zest for life, art and graceful aging. And of course, Martin Luther King and Ghandi for their nonviolent and direct actions for peace and justice.”

As to her favorite places in and around town, Josie replies: “I can spend days roaming the backroads and villages that surround Taos photographing their beauty and magic. I particularly love the journey around the Enchanted Circle. In town, I like to have a caramel latte or mocha borgia at the World Cup. When hungry I head to the Trading Post Café, or Lamberts or Songs. Fun clothes can be found at Franchescas or the Spotted Bear and endless hours can be spent in the many galleries that bless our small town. Lenny Foster’s Living Light Gallery and Michael McCormick’s are two of my favorites and I always recommend checking the Taos News to find a two stepping venue, particularly one under the stars. “

When asked, her advice to all is: “Follow your dreams. Don’t be afraid to go out on your own. Fill your life with light and color. Share what you know and have an open mind to learn whatever you can about others, and the world you live in. Surround yourselves with animals and art and loving supportive friends. Dance and Play. Give the world your open heart. Give birth to new ideas and new possibilities each and every day.”