For Carolyn Haddock, coming to Taos was like coming home. 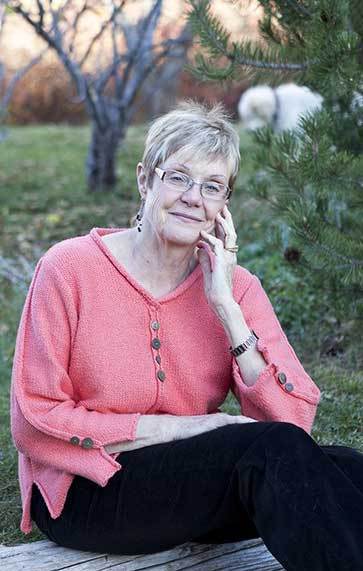 Born and raised in the Southern New Mexico town of Hatch; her father was a farmer and her mother a traditional housewife. “When I look back now I think we probably lived in fairly poor circumstances,” Carolyn reminisces, “but I never felt it at the time. My father’s great goal in life was for my brother, sister, and me to get college educations which neither he nor my mother had. That, I think for all of us, was the beginning for the rest of our lives. There weren’t very many kids from that little town who got out, or if they got out they didn’t go to college. So, I was blessed that way.”

“I majored in political science. It was a very basic liberal arts education, and then I went on to graduate school in public management. A few years after that I went back to school in accounting, sat for the exam and got licensed as a CPA.” By now she was married to Douglas Smith, M.D. had a practice in accountancy and was running another business. But New Mexico had begun to reassert its influence as it so often does.

The Smiths by now had traveled the world, but Carolyn remembers, “My husband and I started coming back to Taos to ski in the 1970’s. He fell in love with northern New Mexico, and very quickly along the way, we both decided that someday, somehow, this was where we wanted be.” With the purchase of the Twining Condominiums in Taos Ski Valley in 1983, the couple made the first move to relocate from West Palm Beach, Fla., where Smith worked as a radiologist. “In the late 80s we had the opportunity to invest in the Taos Inn, which we did in 1989. That got me here full time; that part we hadn’t planned on. I came for three years while Doug stayed in Florida and worked, and then he joined me here.”

Carolyn is proud of what she and Doug, who passed away in April of 2009, were able to accomplish with the Taos Inn, but also with the community at large.

“The Inn was built and started by a woman, Helen Martin, the year after her husband, Doc Martin, passed away. She took what was then a collection of various buildings and homes, and put them together. We still have multiple structures here. Helen enclosed the lobby, which was an open courtyard, an original ‘plaza’. She built all of the courtyard rooms out back and opened “Hotel Martin” in 1936. I was very pleased in 2006 that we were able to go through a major remodeling and building program. We put up a new building of eight hotel rooms, and we named it Helen’s House, which was a really nice feeling of continuation with her. I guess I could say that from the beginning, part of Helen’s influence was always to have a place for artists. Legend has it that the Taos Society of Artists was formed here. Through the years we have always supported the arts and the different cultural venues in town. In that sense I think we are very different from your usual hotel, restaurant, and bar. We are really a major institution in town. We love the non-profit and cultural activities that go on in town, and so we try, as much as we can, to support as many of those as we can.”

What is it about Taos that appeals to independent personalities? “I think it comes from the people who choose to come here, and of the different interests, education, and experiences they bring with them. Perhaps because that core population has always been here, it attracts more people who feel that same way to come. Then there’s that historical diversity of the population and the cultures, and again, in a wonderful setting. I also think it has always been attractive that it is hard to get to Taos. You have to really make the effort. I was talking with someone the other night who said, you know, you fly into Albuquerque and then you have that long drive, but it’s almost as if you need it, because you need the time to make a transition from the rest of the world to what you are going to find in Taos, to sort of ease yourself back into the special place that you are coming to.”

“We are all independent thinkers” Carolyn continues, “and people choose Taos, I think, for a somewhat alternative lifestyle to be away from a lot of… well …urban issues, but to still have cultural choices right here. I like the fact that you can find your own place here and be accepted, and in turn you accept other people. If you respect and like the person…that gets returned. As a woman, as a business owner here, it has always seemed very comfortable to me. Perhaps that’s because there have always been so many other women in Taos who were doing independent, successful things. Maybe the first women of the west set the stage for the rest of us who came later, who could feel comfortable being women and taking risks, speaking out on our own, and owning our own businesses.”

What is she most proud of? “My contribution to the preservation and enhancement of the Historic Taos Inn. It was such a vital part of Taos when I became involved with it, and it has remained that way. I would like to think that it will go on, and that I have been part of preserving that. I have always felt as much a caretaker as an owner of this place, and so, I would like to think that it is going to continue long after I’m gone.”

What are her favorite places in Taos? “Well, of course the Taos Inn – Doc Martin’s and the Adobe Bar. But I will always have a special place in my heart as well for the Taos Community Auditorium that Doug poured his heart and being into revitalizing, because he felt it was the soul of the community and worth saving. And I truly supported him in that.”