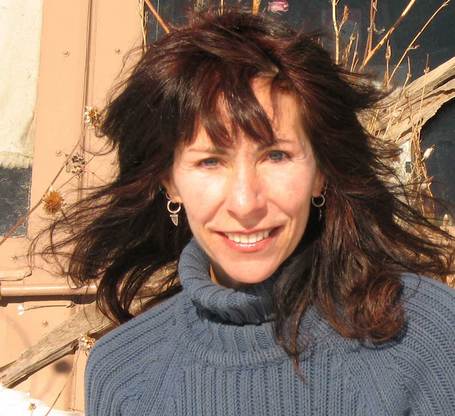 From a very early age, Anna has trusted in and followed her inner voice. Growing up in Plainfield, New Jersey, she was the only child living at home; her sister was 16 years older and away at school during her childhood. After graduating high school, she attended Monmouth College in New Jersey for one year, and was beaconed west after spending a summer in Albuquerque visiting a friend. Anna fell in love with New Mexico; the different climate, atmosphere and attitude appealed to her. She attend the University of New Mexico, graduating with two degrees, the first in Photography and a second, a year later, in Journalism.

In 1994, with her latest degree in hand but no real plan, Anna happened to meet a young woman who was cleaning up after a party in Albuquerque they both attended who appeared to be sorting bottles and cans apart from the other trash. When Anna asked her what she was doing, the young woman told her they were building houses out on the mesa northwest of Taos out of recycled materials. Intrigued, tired of paying rent and eager for a change of scene, Anna decided to come to Taos to see what Mike Reynolds and the Greater World Earthship Community (now Earthship Biotechture) were all about. She liked what she saw, made the transition, and was soon working for Mike and his visionary band of followers while embarking on the construction of her own earthship. It was a collaborative effort: “It took eight years to build. I built it myself, mainly, but I did have help from the community. We were all building at that time, so it was really a shared experience. We’d have tire pounding parties and stuff like that. I didn’t really do much in those eight years but build. I was dirty all the time!”

The experimental nature of Taos along with its tremendous tolerance for risk takers was and is highly appealing to Anna. As she describes it, “It’s just a funky place to live – kind of on the edge, and I’m that kind of person. It seems to me if you really want to do something here there really are no boundaries. You can start it, and if it works, it works. If it doesn’t, it doesn’t. Next.” After completing her home, Anna went to work at the Taos Inn as a way to broaden her social horizons and connect her to the rest of the community beyond the Greater World family. But by now, other interests had begun to intrigue her. In 2006 she was invited to the Sedona Film Fest which was her first real introduction to the world of short films. Being the kind of person who “needs a project”, she saw no barriers to her latest idea – bringing a film festival back to Taos, a community eager to have this particular gap filled after the demise of the critically-acclaimed Taos Film Festival. “And on the way home, I just decided that it would be enriching for our community to have access to indie short films.”

And just like that, she got online, began making contacts, soliciting films and the Taos Shortz Film Festival was born the following year. In her first year she screened 28 films in one day, and last year 64 films from around the world made it up on the screen. 2012 will be the 5th year of the festival and its world-wide appeal has exploded, with entries pouring in from over 20 countries. As Anna says, “I am amazed by the joy…the joy in growth, expansion, support and the constant energy of indie filmmakers’ contributions. I feel a responsibility to the community and these filmmakers insofar as creating a venue for our forum, Taos Shortz Film Fest, where these two parties can meet and exchange ideas. This is what thrills me. Witnessing the networking, seeing people connect and be moved by what we are doing. TSFF feels like a catalyst for transformation. “ As to the exponential growth of Taos Shortz, Anna continues to seek new avenues to extend its reach. This year, the festival will host the 48 Hour International Film Competition will bring over a hundred film makers from around the world to Taos in April of 2012 as collaborators in the event, giving Taos a chance to meet these visitors at social events and networking venues. And Anna continues to dream big: “Next year we are going to apply for an accreditation with the Academy of Motion Picture Arts and Sciences. So that means that anyone submitting would be able to be nominated for an Oscar.”

When asked what it is about her life focus that finds a home in Taos, Anna replies, “Taos is a place where one can go to dream, and fulfill those dreams. We are a quirky bunch here, more accepting than most, people dancing to the beat of a freedom drum. And transformative changes can be made here, if you listen to the flow.” When Anna reflects on those remarkable women who have come before and those who make Taos their home today, here’s what she has to say: “Many of the creative personalities in Taos are women. There is a huge feminine support system here, and always has been, from Georgia O’Keeffe, Mabel Dodge Luhan and Millicent Rodgers to mention only a few of the dames to grace our streets and lanes...and today, women are not just being creative, but standing up, shouting out, YES! this is who I am, and this is my passion! We have opportunities to shine, and are acknowledged and fed by our achievements. No offense to men, but Taos has an unusually strong yin energy!”

What are some of Anna’s favorite places in Taos? “Of course, my new home in Lama, where I tend to my goats, make goat cheese and participate in our community garden (she sold her beloved earthship in October of 2010). And I love hiking the valleys and meadows in the mountains around Taos, where unlike Colorado you can trek just about anywhere without seeing at least 10 other people hiking, and of course, the Rio Grande Gorge. You might also find me hanging out at the Adobe Bar at the Taos Inn from time to time…”

As to her advice to those seeking to become themselves: “Start small, expect nothing, do your homework, follow up on contacts, let the web lead you to investigation; network; and most importantly, believe in what you are doing.”