I was taught by the women in my family to walk in grace and that the women from Taos Pueblo are strong but gentle. We have great endurance because we know where we come from. We have nothing to prove just that we take care of our family, ourselves and our culture. 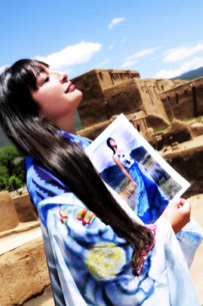 Patricia Michaels spent her youth between Santa Fe, where her parents operated their art gallery, and Taos Pueblo. As a child her first directives came from her mother, grandmother, aunts, and older sisters. She listened to them, her uncles, and to Taos Pueblo elders who taught her the traditional ways and “everything to do with nature.” One of the earliest influences outside the family came from two paintings by the great Santa Clara Pueblo painter Pablita Velarde that hung in the school lunch room in Santa Fe. Later Nampeyo, the legendary Hopi potter who created new designs based on her research of the prehistoric genre of pottery called Sikyatki Polychrome, inspired Patricia by her ability to draw on designs from the past to create new modern works in clay.

Rooted in this indigenous environment, Patricia looked to Taos women like Mabel Dodge Luhan, Dorothy Brett and Millicent Rogers, strong women who loved and appreciated the rich culture of Taos Pueblo. And to fashion designer Martha Reed, famous for her broomstick skirts and blouses with minimal patterning. Patricia had first-hand knowledge of the latest fabrics and trims the designer used. When she returned from college, she went to Martha Reed to buy an outfit only to have the older woman encourage her to create her own designs. Martha had watched Patricia from childhood and knew that she would “take to fashion.”

This came as no surprise to Patricia’s family: women on her paternal side worked in the fur industry and as seamstresses and aunts on her maternal side sewed garments for Martha Reed. In 1985 Patricia apprenticed with the Santa Fe Opera’s costume designer, then went on to study at the Institute of American Indian Arts. Nearly a decade later, after working in Chicago at the Field Museum and an art gallery, she apprenticed with a tailor in Milan, Italy in 2001. When she returned to the States, Patricia headed to New York’s garment district with her ‘design team’ (her young son and daughter) in tow. Knowing the financial sacrifices she would have to make, and the hard work it would take to become known in the competitive world of fashion, Patricia settled her family in New York. She now had the experience and opportunity to become an innovator, to do for fashion what Nampeyo had done for pottery. And she wanted her children, her other source of inspiration, to be part of it. Two years and two collections later, hers was the first Native American label featured in the prestigious New York Fashion Week.

That success led Patricia to develop her own collection. Inspired by such designers as Coco Channel and Fortuni, her design concepts combine haute couture with Native motifs. Her world reached beyond New York when she participated in such cultural fashion exchanges as the W. K. Kellogg Foundation’s Inter-Cultural Fashion Show in Johannesburg, South Africa and the Maori Art Market in New Zealand. Now based back home in Taos, Patricia exhibits her work in museums and at fashion weeks in New York and Santa Fe. Over the past two years, her innovative designs have garnered top honors at Santa Fe Indian Market. As in the past, Patricia draws on nature and on her Taos Pueblo heritage for textures and form. Just recently she created a fabric pattern from an old sign posted along a fence line by the Taos Pueblo War Chief’s Office, incorporating this textile in the execution of her trademark innovative, top quality, functional designs. While Patricia’s hands are at work on drawings for her latest fashion line, she dreams of starting a cottage industry on her land near Taos Pueblo.

Patricia Michael’s favorite sites and sights: the view of the sky and mountains from the heart of the village at Taos Pueblo, her home and North America’s only living World Heritage Site.