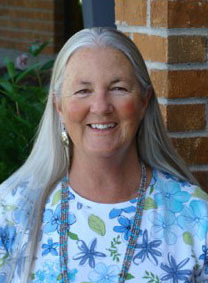 aos is a land filled with prayers. One can feel it emanating from the mountains and all around. I love the light and landscapes, the changing sky and the multi-cultural setting. I feel at home. Taos has a way of letting you know it’s OK to be yourself. It’s the opposite of Las Vegas – there you go to be someone else – a fantasy. Here, you are yourself, a clear reality. That clarity about who you are and what you want can be very addictive!!

Early in her career, Kendall credits Selway Forest Supervisor Tom Kovalicky and District Ranger Gloria Flora for passing on their passion for both the National Forests and for their employees. Tom believed that every employee could make a unique contribution and he never failed to celebrate the achievements of his staff. He believed in Kendall as did her mentor, Gloria, who defended treasured landscapes and her employees. Another inspiration came from the father of the idea of wilderness Aldo Leopold, author of A Sand County Almanac, who in 1912 became Forest Supervisor on the Carson National Forest.

Throughout her career, Kendall has sought to connect people to the Forest Service lands right outside their doors. Westerners have millions of acres of forest and grasslands available, much of it within driving distance, and Kendall sees her role as stewarding the watersheds, especially in the arid West, that provide water for the surrounding communities. Her goal now is to work with the best scientists to address the changes resulting from climate change. From there Kendall intends to dialog with the community to help create resilience and to help people adapt in the face of this pressing priority. She knows that people share her passion for public lands, and that no matter their differences in perspective, they have one commonality—a love for the land.

During her three years as Forest Supervisor, Kendall has hosted the New Mexico Volunteers for the Outdoors, trail crews and other volunteers to improve trails on the Carson National Forest. Her most recent accomplishment, a two-year effort by the Gallatin trail crew, is the new Wheeler Peak trail. Kendall is now working on a trail in the Valle Vidal, north of Clayton Corrals, to provide access to one of the largest stands of Bristlecone pine and to high altitude grasses. She has plans to involve more schoolchildren in plant identification, and have them help compile a plant list that will serve the community and educate future foresters and stewards of the wilderness.

For more information on the area’s hiking trails, maps are available at Carson National Forest headquarters at 208 Cruz Alta Road in Taos, phone 575-758-6200 or visit www.fs.fed.us/r3/carson/recreation/trails/hiking.shtml. For kids, check out The Book of Stuff to Do Outside, link at www.discovertheforest.org.