I first visited Taos as a child and I remember saying I would be an archaeologist here someday. I was enchanted by the architecture, art, landscape, and people. Working for the Forest Service has given me the opportunity to live and work in different places around the US, and participate in diverse assignments from wildfire rehabilitation to studying rock art.

Carrie Leven’s childhood dream came true. She now works on the Questa Ranger District for the Carson National Forest, and expresses what being an archaeologist means to her, “I love the feeling of walking on the same land or finding a stone tool that another person used 4,000 years ago, in this same place on the ground.” Carrie credits her parents for instilling in her a pioneering spirit and a love of sports, camping, and the outdoors through visits to national parks and forests.

The Leven family lived in the Southwest when she was a child, and travels to Puebloan ruins here sparked Carrie’s interest in prehistoric times. She and her family headed west where Carrie had her first archaeological field school experience digging in the hot sun at San Antonio de Padua Mission, a Spanish church near King City, California. She fell in love with archaeology and graduated with a B.A. degree in Anthropology in 1985 from California State University Hayward.

Carrie launched her career in the outdoors by volunteering as a park intern at John Muir National Historic Site in Martinez, California. She began her first job as an archaeologist in 1989, with the Stanislaus National Forest in California's Sierra Mountains, where she also trained as a fire fighter. In 1991 she moved to New Orleans to work as an archaeologist with ESI, a woman-owned cultural resources management company. While in Louisiana, Carrie directed the excavations of the sugar mill and quarters area at Ashland Belle-Helene plantation on the Mississippi River. 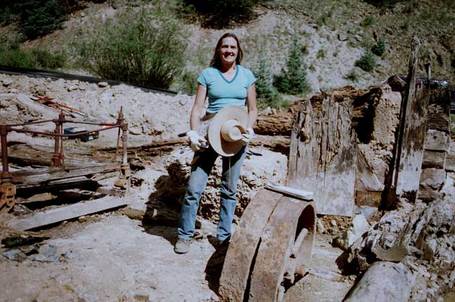 In summer of 1993, Carrie came to Taos to work as a seasonal archaeologist on the Carson National Forest, and she became a full-time archaeologist on Questa District in 2000. In 2003 she worked on the Encebado fire that burned Taos Pueblo lands and left a scar on the landscape: a line running straight up the front of the mountain made by bull dozers cutting a wide fire break. As an archaeologist Carrie went ahead of the dozers and was the last person to walk on the untouched ground before the trees, vegetation and topsoil were scraped away. She remembers: “The most surprising thing I saw on that fire break survey were seashell fossils on a rocky knoll about halfway up the mountain."

Carrie received an M. A. degree in Anthropology from New Mexico State University, where she wrote about her other love, figure skating. Her Master’s Thesis, "Stereotypes on Ice: Media Images and Women's Figure Skating" (1998) constituted the first serious study of women figure skaters as athletes. Carrie also learned to ice skate at the old outdoor rink at Kit Carson Park, through lessons and encouragement from the wonderful people at the Skating Club of Taos. Carrie now serves the 19-year-old non-profit Skating Club of Taos as a volunteer instructor, teaching beginners at the Taos Youth and Family Center’s ice rink.

Her most rewarding archaeology projects on the Carson are the historic reconstruction of Shuree cabin in the Valle Vidal working with Veterans Green Jobs; stabilization of Bunker Hill mine cabin high above Red River; and working with Taos archaeologist Michael Burney on excavations and documentation at historic mining camps as part of a mine waste reclamation project in Bitter Creek watershed.

When she’s not in the field or skating or hiking on National Forest trails in the Taos area, Carrie helps her husband Monte, who is president of the non-profit Taos Chapter of Veterans for Peace, where Carrie serves as Treasurer. The couple lives in Questa where they garden and continue to learn from their neighbors about the area’s rich cultural history. Regarding the future, Carrie hopes to assist with a community project: the preservation of Questa’s beautiful historic San Antonio de Padua church.

Asked why Taos attracts creative and adventurous women, Carrie replies that they are drawn to the area by “the feeling of spiritual beauty of the landscape and the people who live here, and the evidence and stories of adventurous and creative folks who came before, people who were drawn by the same spiritual beauty illustrated by artists, photographers, anthropologists, and in magazine stories of the magical Southwest. Women see the hard work other women have done, and still do, to live in Taos, and they are willing to work hard and be creative to survive here.”