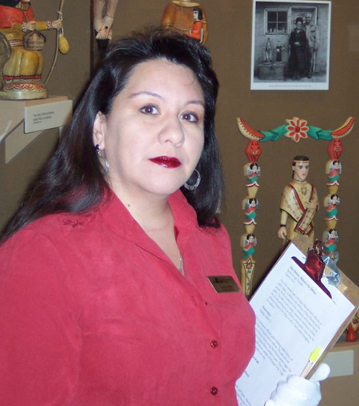 Carmela Quinto is a native Taoseña and mother of Manuel, 19 and Andreita Duran, 15. Born and raised here, her family has been a part of the fabric of Taos for many generations. “I was pretty lucky that I was raised in a matriarchal family, my grandmother, my mother, my aunts, my sister, and now even my fifteen year old daughter inspire me. It’s that whole female influence of… you do what you must and you do the best that you can, but try to be the best person at the same time.” As she tells it, one of the formative experiences of her early life was her involvement in her church, “I was fifteen or sixteen, and I got to go on this hundred mile pilgrimage with these women in my church. It took a week; it was physically tough and just spiritually incredible. It changed my life, it formed my life. These were remarkable women. Twelve remarkable women who had buried children, buried husbands, raised grandkids, been through every surgery you can imagine, every illness, gone basically through hell. They were on this walk of faith and were the most incredibly uplifting, spiritual women you could imagine. And they were ministering to each other. So, I was fortunate that I got involved in the first years that women were allowed to be part of this pilgrimage, because before that it was just men. So, there were twelve of us that first year, and now there are over one hundred and fifty women involved on that particular pilgrimage.”

“I’ve been working at Millicent Rogers Museum for over twenty years. I began in an entry-level position and I worked my way up to Curator of Collections. I’m in charge of all the objects in the museum, everything in the collection; their care, conservation, preservation, and exhibition. It’s a big responsibility, and I take it very seriously. These objects are very important, not only to the visitors who come through who are visiting Taos so they can understand Taos as a community, but also our kids who are growing up here. It’s important for them to understand where they come from, and that they play a role in the history of Taos.”

The museum was founded in 1956, and has been growing ever since. As Carmela tells it, “We are very proud of our collection. It’s a very well-rounded Native American and Hispanic collection. We have a little bit of everything, the nucleus of which is Millicent’s collection of textiles and jewelry. That’s pretty remarkable in itself. We are very proud of our programming, and our exhibitions. We have a wonderful education program that brings kids to us, mostly third and fourth graders, and ties into their curriculum. So, we are able to bring them here and introduce them to the museum, where a couple of generations ago we were unable to do that. They can learn about the remarkable women that have been part of their history. What’s also really important is to see the kids as they come through the museum, and they recognize an object that they’ve seen someone in their family own or create. It ties them to the collection, and therefore ties them to the history of Taos. It’s a validation that they are part of Taos and its history.”

What is it about that ‘Taos energy’ that makes it so special for women? “Taos itself; the valley of Taos; the mountain is a very powerful place. Where you pull your energy from, or your inspiration from, is different for everyone. For some people it’s the mountain. For some people it’s the landscape. For some people, they feel it’s a spiritual spot. It’s different for everyone, but I think that, for most women, their upbringing and their influences throughout their younger years have so much to do with where they draw their energy from. My energy comes from my faith, which is the Holy Spirit in my life. I also encounter remarkable women in my daily life who inspire me. For example, the Museum has a volunteer staff that we simply couldn’t run the museum without. The majority of them are women, and the majority of them are retired. They volunteer at probably four or five non-profit organizations in Taos, and they are more overworked than I am. So, they are another aspect of the incredible women in our community. They are remarkable, because not only do they volunteer their time, but the projects that they work on, and the time that they give of themselves to volunteer is remarkable.” Also, “I think that it’s the energy of the people in Taos. It’s the energy from Taos Pueblo, it’s the energy from what people believe the landscape to be, or the mountain to be, all of the different spiritual churches and congregations in Taos that have found a home here, and all of the little Catholic communities that surround Taos that have such a rich devotion to faith and their way of life. So, it’s not really the place but it’s everything put together. It’s not just one thing, because this has been going on for centuries. Taos is the northernmost pueblo, with a longstanding connection to the Plains and the Pueblos, and has always been a center for gathering and trade. People have been drawn here for over 300 years. That’s the energy that Taos is, and I think that all of that together is really what is humbling.”

What advice does Carmela have for those seeking to know themselves? “My advice would be to draw energy from your faith. It would be to find your Holy Spirit, your own religion, your own faith – that has to be your inspiration. Wherever you are, whether you are from Taos and you move away, or you move to Taos, or you just visit and take a piece of the experience with you… I believe you can take away lessons from wherever you go, but who you are is really based on what you believe. “