At the heart of the Taos Historic Museums, Anita McDaniel and Nancy Delpero live the institution’s mission and vision. Artists themselves, these two dedicated women work together to promote the history, heritage and cultural arts of Northern New Mexico. 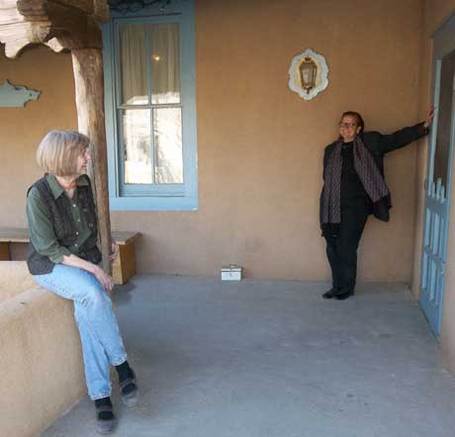 Curator and Collections Manager Anita McDaniel fulfills part of the museums’ vision through exhibitions. This year she organized, designed and installed five separate shows around the Remarkable Women of Taos theme. Out of the Background, the Early Women Artists of Taos; Remarkable Women, Remarkable Prints; and Magic and Mastery, Barbara Harmon, 65 years of Art in Taos were hung at the Blumenschein Home and Museum. At La Hacienda de los Martinez, Anita curated and designed Cultural Threads: Nellie Dunton and the Colcha Revival and Uncovered: Handmade Books by Taos Women (and another exhibition, The Milagro of the Spanish Bean Pot).

Subsequent to graduating from Arizona State University with a MA in Anthropology and Museum Studies, Anita was hired as the curator of Southwest Collections at the San Diego Museum of Man. She moved to Taos 1988 to take the position of Exhibit Designer at the Millicent Rogers Museum. Out of her experience as an exhibit designer and preparator, Anita developed woodworking skills. She has been a furniture maker for over 20 years. Her rustic furniture is inspired by the Adirondack style of the 1930s and 40s. Anita creates the vintage look of her furniture by combining aspen, willow and other locally found materials. Anita found another outlet for her talents. In 1998 she was instrumental in starting the Rio Costilla Studio Tour which will celebrate its 15th year in 2013. Including Costilla and Amalia, New Mexico, and Garcia and Jaroso, Colorado, it is the only artist studio tour that covers communities in two states.

Anita and her husband, Gene Ramsey, live in Jaroso, Colorado, with their cat, two dogs and three donkeys. The Blumenschein Home and Museum and La Hacienda de los Martinez top Anita’s list of favorite Taos places. Asked about others, she replied: “For hiking and camping I like Costilla Park and the Wild Rivers Area in Cerro, Country Furnishings of Taos for shopping, Salon X for haircuts, Kit Carson Park for lunch breaks, and the Outback for pizza.”

Nancy Delpero arrived in Taos – sight unseen on Valentine’s Day, 1997. The arrow struck, and she has never looked back. After a 25-year hiatus, Nancy recently returned to her art. Taos became her canvas. She was awestruck by juxtaposition of the beauty of the high mountains and the expansive vistas looking west. The outdoors inspired her to start painting. Painting and the outdoors provide balance in Nancy’s busy life in Taos. She got involved with the artist community right away by joining an established artist drawing group and finding work in three galleries. She was also a founding member of the Taos Society of Portrait Artists and helped curate many portrait shows during the society’s active years. She also took her turn in monitoring an open drawing group that was established in the early 1960s.

The year 2009 brought many changes in Nancy’s life. Inclusive by nature, she was asked to join the board of the Taos Fall Arts Festival and invited to participate in a collaborative installation with 3 other artists at the Rane Gallery. She had a one-person show of her paintings combined with the work of 13 poets at the Taos Gallery. Nancy became President of the Taos Fall Arts Festival in 2011, and along with a dedicated volunteer board of directors and a fresh vision, she was instrumental in bringing renewed life into the 37-year-old festival. In March this year Nancy was one of four women artists featured in the exhibition The Art of the Dress. A Remarkable Women of Taos event, the Millicent Rogers Museum hosted the show in collaboration with the New Mexico Chapter of the National Museum of Women in the Arts.

2009 was also the year that Nancy was hired on at the Taos Historic Museums. She brought new energy and her passion for art into her work at the Blumenschein Museum and Martinez Hacienda. Together with a small, dedicated staff, she now focuses her artistic vision and creative thinking to benefit these two historic adobe gems. Involved in many aspects of the museums--including greeting visitors, managing the gift shop, marketing, and having her pulse on the finances--Nancy finds great satisfaction in promoting artists and the arts through museum programming. When she’s not championing the arts, Nancy enjoys quiet time with her husband Gorus. Her list of Taos favorites include “a hike to Williams Lake, coffee at Wired Cafe, and drinks at the Taos Inn.”

For more information on the Taos Historic Museums, visit http://www.taoshistoricmuseums.com/