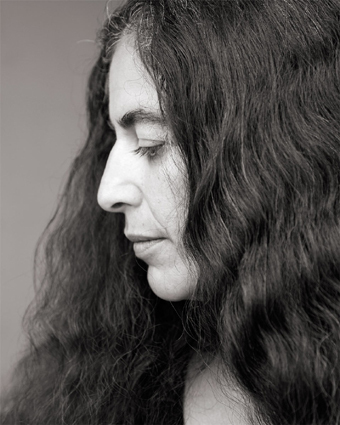 Maye Torres was nine years old when her parents, Frank and Cecelia Torres, piled the family into a station wagon and headed south, where a job as educator awaited Frank. Their years in El Salvador and Ecuador, as well as her experiences in New Mexico, were enough to convince young Maye that she wanted to be an artist.

In pre-revolution El Salvador, communism and democracy grappled and coups and live executions were televised. Political leaflets relied on imagery, not words, to reach a non-literate and starving populace. In Ecuador, brilliant indigenous clothing, long exotic earrings, and tribal people with red-painted faces dazzled Maye, as did painter and sculptor Oswaldo Guayasamin’s powerful images of suffering.

She saw whole villages devoted to a single art form. One town made blue glass, another did weaving, a third silversmithing. She saw public art accessible to everyone, not sequestered in museums and galleries, and people passionately engaged in dialogue about art.

“There were a lot of artists around and they were really respected, not treated like bohemians who didn’t want to get a job,” Maye said, with a peal of her irrepressible laughter.

She earned a degree in art from the University of New Mexico and apprenticed with Ted Egri, who had encouraged her to interact with his sculptures when she was a child, and would later do the same with her children. At Ted’s recommendation, she later apprenticed with Larry Bell, in order to learn about cutting-edge media.

Maye started showing at Tally Richards’ Gallery of Contemporary Art in Taos. Tally was famous for attracting lofty, big-pocketed customers with brilliant art, and Maye’s work caught the attention of collectors from the east and west coasts and Texas. She showed
at venues throughout the Southwest and at Taos’s New Directions Gallery, owned by her mother.

“I want my art to move and stimulate something in people’s hearts and minds and open a different view of our existence,” she said. Her drawings, sculpture, and ceramics incorporate ideas from science, technology, religion, spirituality, politics, and popular culture, and are particularly remarkable for a subterranean atavism that hearkens back to the pre-Columbian Americas, and which may arise from genetic memory.

Her family goes back 13 generations in the Taos area. “I feel eternally connected to the land, its people, and the magic because of it,” Maye said, describing a rootedness in Taos’s mountains and valleys that goes beyond metaphor. She spoke of the joy of family newborns and elders, strands in a tapestry that extends back into antiquity and forward into the unknown.

According to family history, her forebears include the influential Padre Antonio Jose Martinez (1793-1867), who played a defining role in New Mexico religion, education, and politics throughout its Spanish, Mexican, and U.S. periods.

Throughout the births of her now-grown sons, Isaiah, Zach, and Matthias, Maye divided her time between them and her studio, despite conventional wisdom that women must give up art for family, or vice versa. Motherhood fed and deepened her art. “My sons are my true masterpieces,” she said. They “taught me the real, true meaning of creativity.” Giving birth was the ultimate creative act, and her new consciousness of the alchemy of gestation informed her art. “Ideas I have in my head aren’t going to be ready for at least nine months, then they are birthed,” she said. “That to me is when the real art starts to happen.”

After the devastating death of her friend and husband, Rory Wagner, Torres had to leave New Mexico. She first met Rory when she was 16. They grew into an impassioned, intimate, and ultimately romantic friendship, with art at its heart, stitched together by similar views of the world’s absurdities. “He was one of my greatest teachers,” said Maye.

She is presently artist-in-residence at 15 Rose, the historic hostel in Venice Beach, California, joining a lineage of artist-guests that includes Charlie Chaplain and Jim Morrison of The Doors. She describes Venice Beach as a vortex for creatives and crazies.

“I need to be immersed in the vortex that really represents the new millennium,” she said. In her room an array of blank canvases awaits. Painting would be a new direction for her.

“I see a renaissance brewing in the world,” said Maye, “where people stop doubting themselves and start creating en masse.”

Asked about her favorite places in Taos, Maye says she loves getting out in nature. One of her favorite places to walk is along the Rio Grande Gorge Rim. The edge of the Gorge offers a stunning view: the beauty of the mountains, the deep crevasse, all framed by the sky. Maye cites the many wonderful restaurants in Taos: from Mary Jane’s, Michael’s Kitchen and the Taoseño to Sabroso and the Trading Post Café…and everything in between. She enjoys the availability of such a wide variety of eateries and recommends trying them all.