My métier is fantasy, the World of Willderwish, which encompasses both a lighthearted atmosphere and the mysteries of ancient bottles, bouquets, and muses in enchanted gardens. My early travels with my father to remote areas of the Southwest, and the beautiful fairy tales he used to tell me, have been my lifelong inspiration.

Barbara Sayre Harmon is one of the last remaining members of a loosely organized group of artists who arrived in Taos in the 1940s. Born August 8, 1927, in Yerington, Nevada, Barbara Harmon’s love for art, nature and fantasy may be traced to her early childhood when she often traveled with her parents to the romantic Sonoran desert landscape of the Coachella Valley and the San Jacinto Mountains of California. Her father, Fred Grayson Sayre (1879-1939) was a native of Missouri and came from a family of artists and musicians. He was a charter member of the California Watercolor Society and although Sayre never visited Taos he was a member of Chicago’s prestigious Palette and Chisel Club where he met Taos Society of Artists founders including Victor Higgins and Walter Ufer. Sayre painted eloquent vistas of the arid region that is occupied by verbena and other dry-land vegetation and dotted with hot springs. As a girl Barbara Harmon recalls visiting her maternal uncles Bob and Frank Barker’s date farm, an enterprise made possible by the widespread irrigation of the Coachella Valley that began in the early 20th century. There Barbara was drawn to the arcadian singing and guitar playing of Mexican farm laborers, who passed evenings around camp fires under the tamarisk trees.

A school teacher before her marriage, Barbara’s mother Ruth Barker was born to homesteading parents in a covered wagon near Carson City, Nevada. Barbara recalls early drawing lessons with her mother as well as happy hours spent sketching in her father’s studio while he worked at his easel, but Barbara’s peaceful early life was soon marred by tragedy. His heart weakened by an earlier bout with diphtheria, Fred Grayson Sayre passed away in 1939 when Barbara was only eleven years old, and her mother died the following year. Barbara spent the remainder of her youth with relatives in California, and was adopted by her paternal Aunt Bertha and Uncle Captain Louis Thomason Young.
The performing arts were a significant early influence in Barbara’s life. She danced on stage from the age of five at the historic Alexander Theatre in Glendale, California and continued her dance studies instead of competitive sports in high school. Thanks to a friend who worked as a lighting technician, Barbara’s family often enjoyed free tickets to performances at the Hollywood Bowl and the Greek Theater, venues which featured a wide range of symphonic music, opera, dance and theatre. Barbara collected 1920s magazines that she found in second-hand bookshops, taking note of articles about the groundbreaking Russian Ballet artists and the work of avant-garde costume designer Natalia Goncharova (1881-1962). Dancers are a prominent subject in Barbara’s pastels and oils, in which she captures the grace, motion and color of the dance.

After high school, inspired by a cousin who worked as a drama coach for MGM Studios, Barbara first thought she would study acting, but she soon turned to the visual arts instead. In 1945 Barbara Sayre Young enrolled for two and a half years of study in Emil Bisttram’s School of Fine Art in Los Angeles. A Hungarian-born modernist painter who was influenced by the avant-garde color and design theories of Jay Hambidge (1867-1924) as well as the esoteric teachings of Russian-born painter and educator Nicholas Roerich (1874-1947), Emil Bisttram (1895-1976) empowered his students to achieve their individual creative potential. Bisttram’s School followed, on a smaller scale, an educational model not unlike that of New York’s Art Students League, with its main campus in New York City and summer school in Woodstock where pupils worked en plein air. During the winters Emil Bisttram’s students drew in his Los Angeles school from life models, while in the summers they traveled with their teacher to Taos, New Mexico to paint outdoors in the landscape and from Native American models.

Drawn to esoteric philosophies, Emil Bisttram emphasized the design theories he learned from his own mentor Jay Hambidge, including Dynamic Symmetry and Sacred Geometry. Barbara Harmon recalls that Emil Bisttram provided the technical fundamentals she needed to attain her unique creative vision, and in her work she applied the geometric principles she learned from Bisttram to subjects drawn from the natural world and her imagination.

It was during her studies with Bisttram in Taos during the summer of 1947 that Barbara Sayre Young first met her future husband and fellow painter Clifford Harmon. The couple married in Taos in 1948 and soon purchased the land where they built their home from the artist Duane Van Vechten, another of Bisttram’s students.

While attending Bisttram’s Los Angeles classes, Barbara discovered another passion as she waited for the cross-town bus in the bookstores of downtown Los Angeles. There she first saw the illustrated children’s books of famed British artist Arthur Rackham (1867-1939), including the landmark Wind in the Willows. She went on to locate volumes by Edmund Dulac, Kay Neilson, Kate Greenaway and other British children’s book illustrators. While post-World War II American children’s literature tended toward historical and social realism, British fiction remained firmly rooted in fantasy worlds. The British influence remained dominant in both the style and content of Barbara Harmon’s own illustrated children’s books including Tabigail’s Garden (1967); The Little People’s Counting Book (1968); Monday’s Mouse (ca.1971-72); This Little Pixie (1969); The Tumpfee Wood Acorn Book (1977); and Thimbly Hill (1980).

As a student in Los Angeles Barbara Sayre Young was inspired by the work of French painter, stage designer and illustrator Marie Laurencin (1883-1956) and French Symbolist painters Odilon Redon (1840-1916) and Maurice Denis (1870-1943), and their work informed her own later oils and pastels of dancers, fairies and flora. Barbara was influenced by a wide range of graphic artworks in her family’s collection, including woodblock prints by renowned Japanese printmaker Utagawa Hiroshige (1797-1858), and etchings by Emil Kosa (1903-1968) and Lionel Barrymore (1878-1954). She also saw monotypes by actor and printmaker Joseph Jefferson (1829-1905) in vintage issues of The Century Magazine. Barbara’s father collaborated with Canadian American painter and etcher John Wesley Cotton (1868-1931) to produce a series of etchings, and when Barbara was sixteen her Aunt Viola gave her the 1927 book, Masters of the Color Print, which featured Asian-inspired, color drypoints by British watercolorist, printmaker and illustrator Elyse Ashe Lord (1900-1971). Barbara credits Lord with being a spiritual mentor to her own drypoint work, calling her “the great printmaking love of my life.” 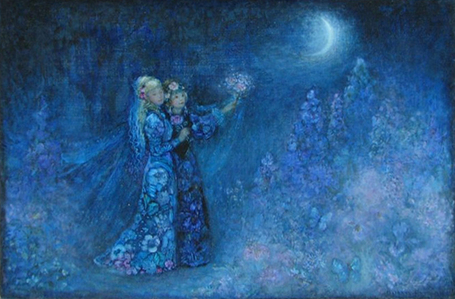 Barbara Harmon’s first prints were monotypes created using the Dynamic Symmetry principles she learned from Emil Bisttram. Utilizing oil pigments thinned with turpentine she worked with abstract spattered designs and floral compositions on glass plates printed on Chinese paper. Their friend Lawton Parker gave her and Cliff an etching press as a wedding gift in 1948, enabling further experimentation. At the legendary Black Mountain College near Asheville, North Carolina in 1949-50 Barbara was inspired by her conversations with printmaker Joseph Fiore (1925-2008) about drypoint á la poupée, a multimedia monotype process in which colors are daubed directly onto the engraved plate before printing. She has also produced photoengraved offset lithographs including illustrations for The Little People’s Counting Book completed in collaboration with the Baker Gallery in Lubbock, Texas.

In addition to advancing her printmaking at Black Mountain College Barbara worked in bookbinding and paper marbling, absorbing the design lessons of the Bauhaus that would inform all of her future work. The Bauhaus movement was founded in 1919 by German architect Walter Gropius (1883-1969) based upon a concept of unification of architecture, sculpture and painting through design and craft. The Bauhaus philosophy came to Black Mountain via Josef Albers (1888-1976), who taught at the College from 1933-1949.

Barbara began to paint in oil at Bisttram’s School, where she learned the mechanics of preparing her ground, techniques of brushwork and methods to ensure permanence of the finished painting. She works in a direct, premier coup or alla prima method on the canvas, with either a light sketch in pastel or conté crayon or with no preliminary drawing at all. While she may put a painting aside to revisit it months or even years later, her initial composition is usually completed within a few days. Barbara prefers using a toned ground to establish the base color for the composition, and explains that her joyous, expressive colors are seasonally inspired, like her subjects, and include the fiery hues of early spring bulbs, the golden tones of autumn leaves and the muted hues of the winter landscape.

Like oil, pastel has been an important medium for Barbara Harmon, one she envisions as a significant primary means of expression rather than simply a vehicle for making studies for finished work in other media. For approximately three years in the 1960s Barbara worked only in pastel, and was one of the few Taos artists doing so. She credits her awareness of the masterful pastels of American Impressionist William Merritt Chase (1849-1916) as well as Andrew Dasburg (1887-1979), Viola Grayson Sayre (1883-1975) and Nell Walker Warner (1891-1970) with inspiring her pastel work. Barbara often combined watercolor washes with pastel overlay to create multimedia works concerned with the effects of light on her subject. She recalls being profoundly inspired by a Luminist painting she and Cliff saw at the Los Angeles County Museum during a trip with their classmates at Bisttram’s School. The high key, pale colors resonated with a life and energy that continue to inform Barbara Harmon’s own radiant, kinetic pastels of dancers, flora and other subjects.

In 1963 Barbara and Cliff Harmon opened The Children’s Gallery on Bent Street which they operated for a number of years. She has also exhibited her work at the Baker Gallery of Fine Art, Lubbock, Texas; the Stables Gallery, Taos; and Blair Galleries, Ltd., Santa Fe. Barbara will be featured in an upcoming one-person exhibition opening September 21, 2012 at the E.L. Blumenschein Home and Museum in Taos. The exhibition will continue through April 21, 2013.

At eighty-five, Barbara Sayre Harmon is as energetic and prolific as ever, portraying delightful worlds both real and imagined in a range of media. She and Cliff still live today in their original adobe home, and both continue their long and joyous creative adventure.