This lady is a big breath of hope in a cynical age. --John Nichols*

IN 1947, TAOS COUNTY TEACHER Rufina Baca was fuming: Despite the fact that more than 90 percent of children in local public schools were native Spanish speakers, the use of Spanish had been banned in New Mexico classrooms. Baca, however, was determined that her students not be denied their heritage. For help, she turned to Jenny Vincent, a local musician who shared her convictions. In defiance of state law, Jenny took her accordion and guitar into area schools to teach Taos County children songs in their own language. 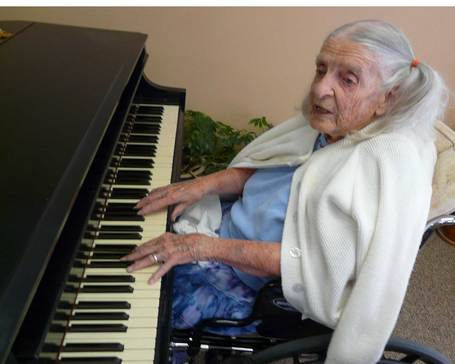 This action amounted to quite a leap for Vincent, who was born Deborah Jeannette Hill in Northfield, Minnesota and grew up in the fashionable Chicago suburb of Winnetka. Jenny was a child of privilege. Vivacious, athletic, and musical, she was the beneficiary of an exceptional education at the private North Shore Country Day School, an experience that included the kind of international musical and cultural programs to which less affluent children might not have access. Having started piano lessons at age five, she went on to major in piano and composition at Vassar College.

After graduating from Vassar, Jenny married her high school sweetheart, Dan Wells, and soon they sailed for Europe. In Heidelberg, Germany, where Dan studied with the philosopher Karl Jaspers, Jenny witnessed early signs of the rise of Nazism. It was in Germany that Jenny acquired her first accordion, the instrument that would become her signature musical medium. With his interest in D. H. Lawrence, Dan gained introductions to members of Frieda Lawrence’s family. Later, he and Jenny continued their “Lawrence Trek” in England, where they met many of the famed author’s friends and family. Upon their return to America, in 1936, they received a letter from Frieda, inviting them to visit her in Taos.

That visit changed Jenny’s life. Turning away from the milieu in which she had been raised, she fell hard for the landscape and people of Taos County, embracing their cultures and music. She and Dan bought an abandoned ranch above San Cristobal, restored it, and opened a school. At the same time, Jenny launched a lifetime of preserving and promoting the folklore and music of the region.

In 1943 Jenny became Taos County educational director for the Rocky Mountain Farmers Union, an appointment that proved to be a milestone in her life. The RMFU had been founded to support small, independent farmers in New Mexico, Colorado, and Wyoming, and soon enough Jenny was busy with publicity, meetings, and food and health cooperatives. She embraced the union’s credo that stable farm and ranch families are the foundations of healthy rural communities, and that healthy rural communities bolster the entire nation’s economy. “I feel that it’s important to be part of such an organization in order to voice and act on one’s belief’s in government,” she said.

Dan left Jenny after World War II, but Jenny and Dan’s sister, Fran, continued to operate San Cristobal Valley Ranch. In 1948 she met and married Craig Vincent, who had worked in the War Shipping Administration during the war and was then executive secretary of the Rocky Mountain Council for Social Action.

Her engagement with union activities, as well as her marriage to the politically active Vincent, opened the door for Jenny to take her music in new directions. From that day to this she has pursued music not only for its own value but also as a medium to break down barriers between people. She began a half century of voluntary appearances in public schools, as well as consistent support of union activities, including the famous “Salt of the Earth” miners strike in southern New Mexico. She sang with Pete Seeger at the 1948 Progressive Party presidential convention, performed for the Veterans of the Lincoln Brigade in New York, once accompanied on the piano her hero Paul Robeson, and became a regular participant at the National Folk Festival. All of Craig and Jenny’s populist activities in these early years of the McCarthy Era soon brought them to the attention of the FBI.

In 1960 Jenny was waiting to go on stage at the Folk Festival in Washington, DC when a messenger handed her a subpoena to appear before the Senate Internal Security Committee. In a prepared statement to the committee, Jenny said, “I came to Washington DC to sing at the National Folk Festival, as I have for the last seven years, to sing the Spanish language and cowboy songs which are part of the folk culture of the Southwest, where I live . . . The National Folk Festival will best serve democracy as long as it can freely preserve these diverse folk traditions that are so important in creating friendship among all peoples. It will cease to serve democracy the minute it is required to screen its participants on the basis of creed, whether it be social, religious, or political . . . As for the Eastland Committee, I have no intention to sing for it. I do not sing its theme song of bigotry. I believe our country needs to breathe the full fresh air of freedom, and we will be able to breathe better when this committee, and its counterpart the House un-American Activities Committee, are abolished.”

Jenny returned to San Cristobal, where she saw her son, Larry, off to college, and adopted the newly orphaned sons of her former sister-in-law, Michael and Dimi DiSanti. She continued to sing for striking workers, to support such causes as the return of Blue Lake to the Taos Pueblo, and to volunteer in public schools. (In 1973 Jenny addressed the International Folk Music Council convention in France, where she expressed her conviction that folklore in general, and folk music in particular, should be recognized as dynamic and exciting tools to be encouraged in schools throughout the world, “most especially where children are struggling for their own self-identity.”)

She also participated in workshops at the Highlander Folk Center in Tennessee, a place for people working for social change, notably during the peak years of the Civil Rights movement. The Vincents also provided financial support for the establishment of El Grito del Norte, a Hispanic/Chicano rights newspaper founded in Española, and threw their support behind the creation of La Clinica del Pueblo de Rio Arriba. Craig Vincent also briefly operated El Crepusculo, a forerunner of The Taos News, where his employees included the future writer Edward Abbey, the poet Judson Crews and his wife, photographer Mildred Tolbert, and the activist-artist Rini Templeton.

The National Folk Festivals gave Jenny widespread exposure, but a significant development in her musical life occurred back home in Taos in 1956, when she heard a mandolin player named Hattie Trujillo perform at the Mabel Dodge Luhan House. Hattie in turn introduced Jenny to guitarist Nat Flores, and the three formed Trio de Taos, a group that became one of New Mexico’s most popular ensembles. The Trio stayed together for 30 years and issued a still-popular CD, Musica Para Una Fiesta. That same year Jenny founded Cantemos Records and opened Taos’s only music store. She released two solo recordings, Spanish-American Children’s Songs: Songs for Children of All Ages and Spanish Folksongs of the Americas. She sent a copy of the latter to Paul Robeson, who included one song from it in his farewell concert at Carnegie Hall, explaining that he had learned it from Jenny Vincent in New Mexico.

In 1960 Jenny founded Taos Recordings & Publications as a complement to Cantemos Records. With TRP Jenny gave back to the traditions which had enriched her own life, issuing records by local musicians of Matachines music, Spanish alabados, northern New Mexico tunes, and secular songs from Taos Pueblo, as well as books of New Mexico dance music and the work of local artists, among them sculptor Patrociño Barola.

The Trio de Taos disbanded in 1986 after Hattie suffered a stroke. Ten years later Jenny formed her second popular group, the Jenny Vincent Trio with Audrey Davis on violin and Rick Klein on guitar. The three performed together for 10 years and released the CDs Spanish-American Dance Tunes of New Mexico: WPA 1936-1937 and Under the Western Sky. In 2006 Amy Goodman, host of radio’s Democracy Now, recorded Jenny in Taos singing her version of “God Bless America,” which includes the following chorus:

Troubadour and trouper, exemplary citizen and good neighbor, Jenny Vincent continued singing and playing and fighting the good fight for individual freedom, cultural preservation, and global understanding into her 90s, and even today entertains her fellow residents of Taos Retirement Village at the piano.

If you were fortunate enough to be in any Jenny Vincent audience during her active years, you likely experienced the full arc of her life. It was always there: the five-year-old hearing her first folk songs, the teenage tomboy picking out songs on her mother’s piano, the accompanist playing while Frieda Lawrence or Paul Robeson sang, the union maid on the picket line, the volunteer singing for school children, the preservationist promoting local culture through song. Just about everything one needs to know about Jenny Vincent is summed up the in the closing line to a verse she contributed to the traditional Hispanic song “De Colores”: and that’s why the love that embraces all colors, all races is greatest for me.”

*From the Preface to Sing My Whole Life Long: Jenny Vincent’s Life in Folk Music and Activism by Craig Smith (University of New Mexico Press, 2007).

Jenny Vincent has performed music in some of her favorite places: the schools north of Taos in Arroyo Seco, Arroyo Hondo, Questa, Amalia and Costilla as well as places closer in like the Taos Ski Valley, the Taos Inn and the Martinez Hacienda.