The poetics of mysticism, the willingness to explore the mystery and rest in not knowing, and the appreciation of multi-cultural perspectives on peace and justice, are all themes in my work that I can directly trace to the influences of Taos. 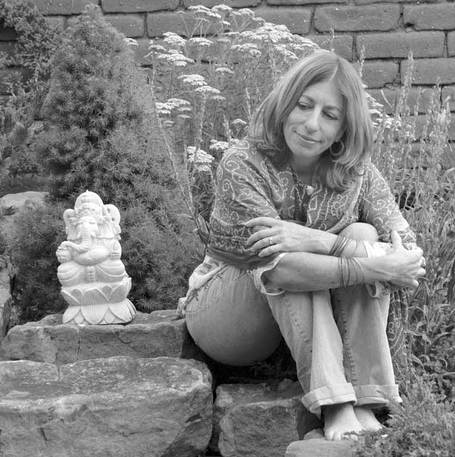 Mirabai Starr was born in New York in 1961 to secular Jewish parents who rejected the patriarchy of institutionalized religion. Intellectual, artistic and socially conscious, they were active in the anti-war protest movement of the Vietnam era.

In 1972, Mirabai’s mother, father, and her younger brother and sister uprooted from their suburban life and embarked on an extended road trip that led them through the jungles of Mexico’s Yucatan Peninsula, where they lived for many months on an isolated Caribbean beach, and ended in the mountains of Taos, New Mexico. There, the family embraced an alternative, “back-to-the-land” lifestyle, in a communal effort to live simply and sustainably, values that remain important to Mirabai to this day.

As a teenager, Mirabai lived at the Lama Foundation, an intentional spiritual community that has honored all the world’s faith traditions since its inception in 1967, and where she holds lifelong membership. It was at Lama that Mirabai encountered many of the leading teachers and timeless teachings of diverse spiritual paths: Hindu; Buddhist; Sufi; Jewish; Christian and Native American. She was especially influenced by Ram Dass, Reb Zalman Schachter-Shalomi, and the teachings of Murshid Samuel Lewis. This ecumenical experience became formative in the universal quality that has infused Mirabai’s work ever since.

Having studied at the feet of some of the most famous spiritual teachers of the 20th and 21st centuries, it is her mother, Susanna Starr, who has been Mirabai’s greatest guide and most powerful inspiration, though she does not subscribe to any organized religion. According to Mirabai, “In her non-dogmatic, unsentimental, unconditionally compassionate way, my mom has always emphasized finding the sacred in the everyday. I have watched her enter states of profound rapture watching the way the light touches the tops of the junipers as the sun begins to set on a winter afternoon in the Arroyo Hondo valley where she lives. Whenever we visit, she has to take us out to her pond to see the way new rocks have been positioned, to hear the song of the acequia [irrigation ditch] as it ripples past, to count how many different species of birds come to drink from the fountain. My mom once told me, in her characteristically quiet, unselfconscious way, that every night when she goes to bed she feels so blessed and wants to share her good fortune with those who are suffering, so she imagines droplets of golden light falling gently on people everywhere who are at that very moment enduring some terrible hardship. This is as potent a spiritual teaching as I have ever received from any recognized master.”

Since 1993 Mirabai has been an adjunct professor of Philosophy and World Religions at the University of New Mexico-Taos. Her emphasis is on making connections between the perennial teachings found at the heart of all the world’s spiritual paths, in an effort to balance action with contemplation and engage in a life of conscious service.

As an author, Mirabai has received critical acclaim for her revolutionary new translations of Dark Night of the Soul by sixteenth century Spanish mystic, St. John of the Cross, and The Interior Castle and The Book of My Life, by St. Teresa of Avila. She is the editor and writer of the 6-volume Sounds True Series, “Devotions, Prayers & Living Wisdom,” and contributing author to Living Fully, Dying Well: Reflecting on Death to Find Your Life’s Meaning. Her poetry collection, Mother of God Similar to Fire, is a collaboration with iconographer, William Hart McNichols. Mirabai’s newest book, GOD OF LOVE: A Guide to the Heart of Judaism, Christianity and Islam, positions her at the vanguard of the emerging “Interspiritual Movement.” A starred review of God of Love in Publishers Weekly says, "…she writes about the three Abrahamic religions as a woman in love, not as a tenure-hungry prof."

Mirabai lives in the mountains of Northern New Mexico with her husband, Jeff Little (Ganga Das). Between them, Mirabai and Jeff have four grown daughters and six grandchildren. Mirabai’s youngest daughter, Jenny, was killed in a car accident in 2001 at the age of fourteen. On that same day, Mirabai’s first book, a translation of Dark Night of the Soul, was released. She considers this experience, and the connection between profound loss and longing for God, the ground of her own spiritual life. Now a certified bereavement counselor, Mirabai helps other mourners harness the transformational power of loss.

Some of Mirabai’s favorite places in Taos include the Lama Foundation, an ecumenical community in the mountains (famed birthplace of the groundbreaking book, Be Here Now, by Ram Dass); Hokoji Zendo on El Salto Mountain; the Tibetan Buddhist stupas in El Rito & Tres Orejas; the Neem Karoli Baba Ashram and Hanuman Temple and Taos Mountain Sangha (both in Taos), the Harwood Museum of Art, and the University of New Mexico-Taos.

For further information on Mirabai Starr, visit her website