Taos has my heart. I realize no day went by there that I didn't stop, take a breath and look around. I'd never seen sky so big, so deeply blue. I'd watch the big white cumulus clouds sail over Taos Mountain and then wispy ones trail behind. I felt immense, limitless as the sky and in the same moment I felt unimportant, little – and that smallness felt good, placed me properly in the dimension of life: I became humble. This was my home, the beginning roots of my spiritual life. 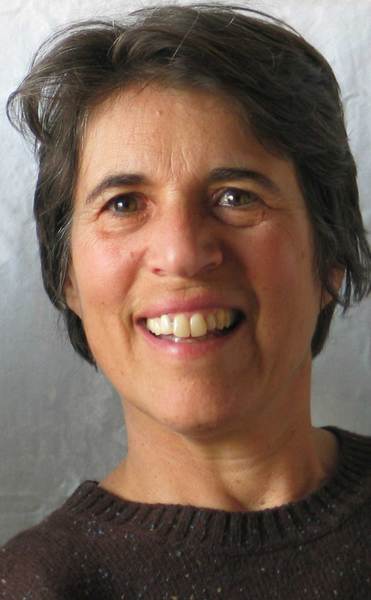 Author, poet, painter and teacher Natalie Goldberg spent her first years in Brooklyn, New York. When she was six, her family moved out to Farmingdale on Long Island, where her father owned the Aero Tavern. Already in childhood, Natalie had a passion for books and reading. Of all the books she read in these formative years, The Ballad of the Sad Café by Carson McCullers spoke most deeply to her heart. Natalie had read the book in ninth grade. She would later credit that single book as the one that led her eventually to put pen to paper at age 24. In 1972, while living in Ann Arbor, Michigan as part-owner of the Naked Lunch restaurant, Natalie read Fruits and Vegetables, a slim volume of poetry by Erica Jong. The world of writing suddenly broke open when Natalie realized that she too could write about what she lived. She began to find her voice and coined encouraging phrases like: “In order to write you must have confidence in your own experience, that it is rich enough to write about.”

A job brought Natalie to New Mexico in the early 1970s. She had gotten her teaching certificate in Ann Arbor, so when she got a call from the Albuquerque school district personnel manager with a job offer, she left Michigan. While teaching sixth graders in northwest Albuquerque, she had an awakening experience that landed her at the Lama Foundation in San Cristobal, twenty miles north of Taos. The first person Natalie met was Barbara Durkee (now known as Asha von Brieson), one of the intentional commune’s founders. Her encounter with this remarkable woman and the Lama Foundation proved life-changing. First Asha encouraged Natalie to find a practice. She subsequently experienced the variety of spiritual traditions—ranging from Native American spiritualism to Judaism—offered at the Lama Foundation. Later Asha supported Natalie in another way. As head of the “hippie school” DaNahazli (Navajo for “spring will come again”), she hired Natalie to teach there, giving her free rein to develop classes: “I taught writing to barefoot kids wearing cantaloupe-seed necklaces and we did Sufi dancing every Friday afternoon in the playground.” Spiritual luminary Ram Dass often stopped in at the school when he was visiting Lama Foundation.

In 1976, after reading an article about polishing the mind by Beat poet Allen Ginsberg, Natalie spent six weeks studying with him at the Naropa Institute in Boulder, Colorado. She took a poetics class with him, and also attended evening lectures with the Tibetan meditation master Chögyam Trungpa Rinpoche (who had led hundreds of people across the Himalayas into India during the Chinese invasion of Tibet).

Natalie later recalled Ginsberg telling “stories about Jack Kerouac and what it was like to be a poet in the 1950s. He wanted us to understand the depth of the Beat generation.” Ginsberg also wanted his students to see how the Beat generation of poets linked to all other poetry. Natalie realized that his experience came from being a working writer. Besides poetic form, Ginsberg, a long-time Buddhist practitioner, taught the examination of thoughts in writing. Wanting to understand the mind in the context of writing, which she hadn’t learned in her academic studies, Natalie started something new:

I started to write and time myself and keep my hand moving. I explored the vast space of what was possible on the page – where my mind traveled, backward, forward, upside down. I had no goal, no product direction. I watched how I thought. I came into some kind of intimate relationship with myself. I wasn't sure what I was doing, but it was so compelling that I went deeper and deeper into it.

After this experience, at age 26, everything came together for Natalie. Like spontaneous combustion, when she returned to Taos she began painting, writing and meditating. Natalie honed the writing practice that culminated in the publication of Writing Down the Bones: Freeing the Writer Within (1986), a book that would revolutionize the practice of writing and break open the world of creativity for beginning and seasoned writers all over the world.

Using the method she first developed at DaNahazli and later conducted with a writing group of eight Taos women in the mid-1970s, Natalie combined writing practice with Zen. She became a serious practitioner in 1974. After twelve years of study (1978-1984) with Japanese Zen master Dainin Katagiri Roshi in Minneapolis, she saw correlations between writing and the 2000-year-old Zen practice of watching the mind. For Natalie writing practice is Zen practice: there is no separation. “It’s all interconnected and interpenetrated.”

In her book Thunder and Lightning: Cracking Open the Writer’s Craft, Natalie addresses what writing practice does with an example. She and a friend had the blues one Sunday. To ease this condition, they tried meditating, then hiking. When neither activity relieved the doldrums, the two alternated writing for half an hour with reading their fresh raw work aloud to each other. It worked, as Natalie wrote: “The effort of forming words, physically connecting hand with mind and heart, and then having the freedom to read aloud transformed us.”

Ever since publishing Writing Down the Bones (sales have exceeded 1 million and the book has been translated into 14 languages), Natalie has taught writing as a spiritual practice to people from around the world. She sees her job as helping people to understand the process of writing and simultaneously to understand the movements of the mind. Natalie has written several other books on writing. She incorporates Zen traditions in her classic bestseller Wild Mind: Living the Writer’s Life to help readers move beyond the craft of writing and get to the source of their creative power. In these writing guides Natalie advocates certain basics for timed sessions meant to get to the heart (or the bones) of writing, like:

Such directives form part the essence of Natalie’s teaching method, which she calls a priori or “first thought” writing, that gets down to the bones. This process fosters “a trust in your own voice, a confidence in your own experience, and a way to approach writing.” Deep-delving explorations of life through writing are characteristic of Natalie’s workshops. When asked to describe what goes on in them, she replied simply “You do a lot of writing.” As a teacher, she is a proponent of “Shut up, show up, and write.” That’s her method in a nutshell.

In addition to writing guides, Natalie has published a novel and three memoirs. In Banana Rose she explores theme of loves, freedom, and friendship through her female protagonist, a painter who lives in a Taos commune. Natalie’s connection with Taos is a theme that runs through her memoirs. In Living Color: A Writer Paints Her World, which explores a new realm of creativity and features 60 reproductions of her paintings, she presents her New Mexico home along with her family, friends and painting trips to Europe. Natalie has been painting since 1974. She showed in Taos for a time at New Directions Gallery, and now Ernesto Mayans in Santa Fe carries her work as does the Mabel Dodge Luhan House in Taos. Another aspect of Natalie’s writing is poetry, for which she received the Bush Foundation Fellowship. She combines her painting and poetry in her books Top of My Lungs: Poems and Paintings and in The Essential Writer''s Notebook.

Natalie’s two other memoirs, Long Quiet Highway and The Great Failure center around Dainen Katagiri Roshi. The Zen master profoundly influenced and shaped Natalie’s life. From him she learned perseverance—how to continue under all circumstances—and to “make positive efforts to the good”. In The Great Failure Natalie summed up his impact on her life:

He taught me the most simple, democratic thing—how to sit still in the center of this busy world. This one thing turned my whole life—affected how I write, eat, walk, think, and don’t think. It has rooted inside me, so that after everything else has been said, every story told, I will never forget it. Even after my ashes are spread, something will abound with an endless gratitude.

This year Natalie is finishing her latest book which will be published by Simon and Shuster in 2013. As for the future, Natalie expresses one of her deepest desires: that her book Writing Down the Bones “be taught in all public and private schools” so that students would learn “how to do writing practice” and so they “come to know themselves, feel joy in expression, trust what they think. Once you connect with your mind, you know who you are and you’re free.”

And Natalie’s other passions? I'm hungry for land, to be on a mesa in New Mexico….I like to walk hard, feel my legs and my breath and my heart pounding, then stop completely and sit on a rock and sit and sit, being there, taking in with my lungs the absolute openness of space and smell, shade and light. I can't live without a plot of land to garden in summer, tall cosmos and zinnias—and oh, my—the few tomatoes that grow in the dry New Mexico soil.

Since 1986, Natalie has taught workshops regularly at the Mabel Dodge Luhan House in Taos.
For those who can’t attend her workshops, Natalie’s many books on writing are the next best thing. For more information about Natalie’s books and other offerings, visit www.nataliegoldberg.com or www.openroadmedia.com/authors/natalie-goldberg.aspx