When I first came to Taos it reminded me of my homeland in old China. I felt at home with the landscape and fell in love with Taos Mountain, the Pueblo people, and the open space. This ancient land made it possible for me to reach deeply back to my roots and regain valuable things temporarily dulled by having lived in a big city for many years. 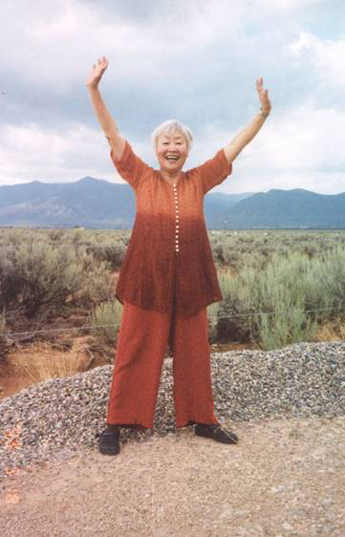 Local artist Pearl Weng Liang Huang was born in China in Fujian Province. In 1949, during China’s civil war, she and her family left the mainland to live in Taiwan. From an early age, Pearl was greatly influenced by her parents and older brother. Her mother was a musician and poet and her father and brother were dedicated to bringing multicultural studies and understanding to a wide variety of people. Pearl was encouraged to be a free thinker, develop individual views, and make appropriate choices. She and her siblings were educated bilingually and encouraged to travel and explore other cultures. Pearl came to the United States in 1964 to pursue an east-west synthesis study course and stayed.

“The role of being a cultural ambassador was laid upon me early in life,” Pearl said. In her 48 years in the USA she has been a language consultant for the Federal Government, a Chinese brush calligrapher, and has had a lifelong career on stage and in films.

She first visited Taos in 1981 and made it her home in 1997, recognizing that Taos has an energy that “brings out the adventurous and creative side of people”. She has helped to nurture and enhance that energy. On the faculty of UNM Taos, Pearl taught Chinese language and culture, and Tai Chi Qi Gong classes. She also created an international program at UNM Taos and raised scholarship funds that allowed students to study abroad. As International Programs Coordinator, Pearl led study groups to China.

“I believe it is important to be aware of the multicultural world we live in. As long as there is ignorance about other people and their culture, there will be differences and misunderstandings in our world.” As a result of this philosophy, she founded the non-profit Taos International Society whose goal is to meet, connect and promote understanding through language, art, music, writing, and film. She currently serves as Executive Director.

Pearl is semi-retired now and continues to teach privately at her own Ru Yi Studio. Ru Yi is a Chinese phrase meaning “as the heart/mind wishes” and shares the name of an ancient object shaped like a short scepter. The ancient Chinese used it for pointing the way and for protection. She believes that everyone is intrinsically remarkable and “all it takes to bring it out is the right light shining on the right path for us to go forward one step at a time.”

As a Taos local, her sense of community is enhanced by visiting galleries, shops and museums on weekdays when fewer visitors are in town. She takes her time, has no specific goals and often has chance encounters with interesting people, artists, even strangers. “Most importantly,” she says, “is being a wife, mother, grandmother, and great grandmother.”