Living in the land and the sky of New Mexico I’m surrounded by constant beauty. Taos is a good place to work, a good place to find solitude and to be able to put in long hours without disturbance. When I look up from my work or out the studio windows in any direction, the sky, Taos Mountain and the surrounding landscape provide constant inspiration. 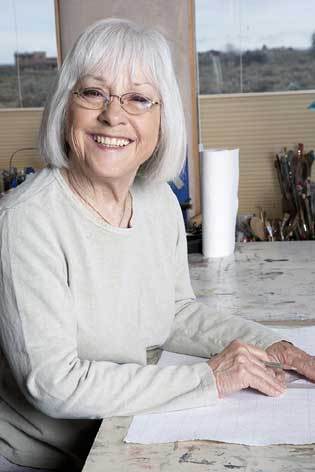 As the sun rises above Taos Mountain, you will find Annell Livingston at work in the studio. She has been at it for fifty years now, quietly in the studio, asking questions, attempting to answer, finding her own unique way. Born in Houston Texas, Annell grew up in La Porte a small coastal town outside of Houston. As a little girl she delighted in playing with the tools of the artist; paint, paper, crayons and pencils. When asked, "What do you want to be when you grow up?" her answer was that she wanted to be an artist.

In pursuit of her dream, Annell began studying art in the early 1960s with Lowell Collins at the Lowell Collins Art School in Houston. She later studied with David Hickman at the University of Houston, the Glassell School of Art, The Museum of Art in Houston, Louisiana Tech with Doug Walton. Other artists and teachers mentored her, including Patrick Palmer, Charles Shorre, and Katherine Chang Liu.

While living in Houston, Annell found representation in various galleries, including the John Fitzsimmons Gallery and the Lynn Good Gallery in Houston and others in San Antonio, Texas and in Ohio. As part of her artistic outreach, she taught at the Art League and at the Watercolor Society in Houston and conducted workshops around the country. Annell also worked on some collaborative projects with women, Pandora’s Box; another project focused on Major Works by women.

In 1991 Annell asked herself, "Who am I and what do I really want to paint?" Most contemporary art is about the urban experience, and her work reflected a woman's urban experience. She commuted to and from the studio, located in an old warehouse in downtown Houston. Her studio floor was concrete, and the sounds that penetrated the walls emanated from trucks, cars and buses on the freeway nearby. Annell began creating grids, based on the square, which seemed to her the perfect symbol for the city. As she drove to the studio in the morning, she observed light as it reflected off man-made materials, and she made notes, for example: "the sky as grey as the morning dove's breast". In the studio she attempted to make these words visible, which resulted in the painting series she called Urban Intersections.

Starting in 1991 Lumina Gallery in Taos began to carry Annell’s work. In 1993 her husband and companion of many years was accidently killed. She needed another scene and came to Taos for three months, just to see if she could continue. On her return to Houston, she sold her house, tearfully said goodbye to her friends and closed that chapter in her life. In 1994, when Annell moved to Taos, the land of high mountain desert, it seemed she had just figured out painting about the urban experience. She found when she moved to a rural community, that the urban paintings didn't work. She had to find another way to talk about the landscape the, her work spoke a different language. Because my work was based on grid, made up of square on square, it was too much “man over nature.” Through trial and error, Annell began to find her way. After many false starts (the road for the artist is not straight), she realized that that she could continue to use the grid, but with the addition of diagonal lines. This variation allowed Annell to include her thoughts about the landscape, the abstracted irregularities of rivers, mountains, and sky. Her colors changed. Instead of muted grey urban tones, she based her paintings on the colors she found in nature. This body of work referencing the New Mexican landscape was not so much about the external world, but about finding that place where the external and the internal world meet. Annell called this series Fragments because she was also thinking about how memory, thoughts and ideas are almost always not whole and complete but fragmented.

Continuing to work with the grid, Annell returned to observing light. She realized how life could be defined by a moment of the day and created another series A Day in the Life. Over time, this evolved into The Eternal Cycle, paintings which captured day into night into day, cycles of the seasons, and the seasons of life. Monochrome, the color selections for these paintings were based on Annell’s observations of light on one particular day.

She began to focus on the notions of the void, the wasteland, or the desert the desert, and realized it was not about what the desert looks like, but what it feels like as an actual place or metaphor.” She called the series that grew out of these thoughts came Poems of the Desert.

Musing on artistic influences, Annell asserts “Agnes Martin is in the studio with me daily. I am also reminded of Georgia O’Keeffe who walked the hills, made her home in New Mexico, and loved and painted here. Although I draw inspiration from Matisse, Wayne Thiebaud, Ellsworth Kelly, Joseph Albers and other artists, I am conscious of the women who have worked quietly and often gone unrecognized. Their strength and determination continue to motivate me.”

Through her paintings Annell wishes to make her mark through unique, strong and authentic paintings which are informed from within, inspired from without, which represent a true meeting point of the internal and the external. Annell has always considered the work itself her success. She believes that “a room of her own, and time” are what every artist needs.

For young artists, Annell has the following advice: “Becoming an artist, does not happen overnight. Regardless of talent, it takes hard work, and it takes a lifetime. Not everyone will like what the artist is doing, many will not recognize what is done. Encouragement may not come often, but rejection will. You will be shaken to your core, and you will have to pick yourself up, dust yourself off, and begin again. If you are seeking something from outside your studio, you will suffer. You must be a self started, self motivator, self-encourager, and one day you will look up from your work and fifty years will have passed, and you will feel you are just beginning.”

And Annell’s favorite places? Northern New Mexico is my very favorite place, inside the studio, or outside hiking trails. I am always inspired by the “view,” which is constantly changing.

For more information on Annell Livingston, visit her website.