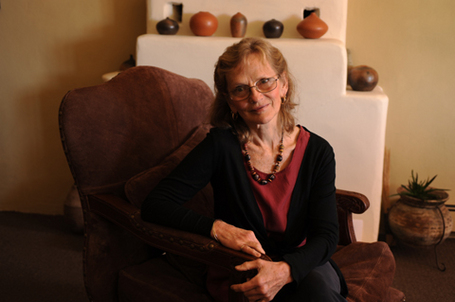 Taos is a wonderful town and I’m so grateful fate brought me here. The beauty of the surrounding mountains, the traditional adobe architecture, the fragrant fields of sagebrush – all of which I enjoy on my bike rides – restore my soul daily.

“I always shoot for the stars,” Bonnie Lee Black said about applying to Columbia University’s writing program at the age of 30, even though she had no money for the tuition. Fortunately, her pluck earned her a full scholarship and prepared her to write her first memoir, Somewhere Child.

Published by Viking Press in 1981, Somewhere Child chronicles the abduction of her young daughter and Bonnie’s journey to Rhodesia (now Zimbabwe), Africa, to reclaim her. This timely memoir, which sold more than 20,000 copies, was subsequently instrumental in the creation of the National Center for Missing and Exploited Children.

At sixty-seven now, Bonnie has accomplished and experienced more in her life than most in multiple ones. She’s as comfortable catering gourmet meals to the rich and famous in Manhattan -- which she did during her ten- year career as a caterer there -- as she is cooking a stew in Gabon, Central Africa, with ingredients purchased fresh daily from the local marché or market (because her humble house had no refrigerator).

Following her two-year service as a health and nutrition volunteer in French-speaking Gabon, she moved to Mali, West Africa, where she taught women the business of patchwork quilting. Both ventures resulted in additional books: How to Cook a Crocodile: A Memoir with Recipes (2010); and Patchwork: A Memoir of Mali (as yet unpublished).
Bonnie says that two remarkable women especially inspired her to write her Africa memoirs: M.F.K. Fisher and Isak Dinesen. In fact, Bonnie says, she likes to consider her How to Cook a Crocodile the “wild grandchild” of both Fisher’s How to Cook a Wolf and Dinesen’s Out of Africa. Bonnie is also the editor of the newly published SOMOS (Society of the Muse of the Southwest) fundraising cookbook, Storied Recipes (2012).

A thirst for excellence and a passion for the possible drive Bonnie onward. Her dedication and zeal emanates from her face whether she is teaching Bread Baking, Healthy Cooking, or Creative Nonfiction at UNM-Taos, or discussing her newest book-in-progress, Imagining Helen, a fictional account of the life of her great-grandmother, Helen David Black, who was born in 1862, in Kirriemuir, Scotland, a contemporary and neighbor of Peter Pan playwright J.M. Barrie. “The bare bones of the story are true – the facts of where Helen was born, how and why she and my great-grandfather, William Black, moved to South Africa, but the rest I have to imagine… I believe Helen wants her story told and has picked me to write it,” Bonnie says.

Others share my admiration for Bonnie’s attitude and achievements. She has recently received a Best in the World award from Gourmand International in Paris, for How to Cook a Crocodile. Her memoir, Patchwork, won first place from Southwest Writers in 2011, and in 2010 she received the UNM-Taos Faculty Senate Award for Most Inspirational Instructor. As is fitting, she used her UNM prize money to purchase a new hybrid road bike. Since then, she can often be seen tooling around town, a twinkle in her bright blue eyes, her blonde hair flying freely in the breeze. Bonnie adds: “I would encourage everyone, resident and visitor alike, to hop on a bike and explore the back roads of this glorious town. And don’t forget to look up at Taos Mountain and give it a respectful bow.” Bonnie’s favorite bike route these days is along Kit Carson Road to Witt Road, past the lovely Old Taos Guesthouse Bed & Breakfast, and up along the high ridge. “The view is breathtaking,” she says, “and it’s downhill for me all the way home. I feel like a bird!”

For more information on Bonnie Lee Black, go to her website.