Here in Taos County, nature is dramatic and ever present in our consciousness. It is much easier to feel our connection with the Earth here than in an urban area. Every day I am filled with gratitude for the skyscapes, the mountains, the sagebrush plateau, the rivers and farmlands of Taos. I am constantly in awe of the landscape and the wildlife here. – Roberta Salazar 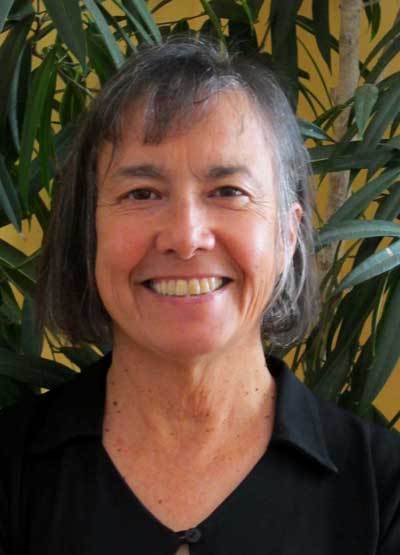 As a youngster, Roberta Salazar’s play included exploring her family’s farms. Both sets of grandparents lived on beautiful farmland in northern New Mexico. She observed her elders’ reverence for the natural world and their passion for farming and family life. Her parents devoted their lives to growing plants, and raising kids and animals. They enjoyed working with their hands. Each year Roberta tagged along as her father worked the land. He planted six acres, alternating corn and alfalfa, as well as a prolific one-acre vegetable garden. Her mother tended the garden and cooked and preserved the food the family grew. Like so many farmers in the Taos Valley, the Salazar family was resourceful and frugal. Roberta recalls her father‘s ability to “fix things and recycle – he actually renovated his home with all recycled materials and deliberately chose not to have plumbing in his house.” Lessons learned from being witness to her family’s land-based traditions directed Roberta’s life path.

When she was 22, Roberta met her husband, Doug Bridgers. An accomplished rock climber, backcountry and downhill skier, kayaker and river runner, he enriched her love of the natural world. With Doug’s guidance, Roberta (and later the couple’s son, Noah), developed a deep appreciation for wilderness. She joined him as a rock climber and climbed the Grand Teton, Half Dome, the Sandias, the Organ Mountains and the Brazos Cliffs.

Her many challenging outdoor adventures and childhood experiences connecting with the land, informed Roberta’s career choice. She went back to college and got a degree in wildlife biology. In the 1980s she worked as a park service interpreter and back country ranger for the National Park Service at Bandelier, Quarai, and Pecos National Monuments. Under the U. S. Fish and Wildlife Service, Roberta conducted wildlife surveys at the Bosque del Apache National Wildlife Refuge in New Mexico, the Alamosa/Monte Vista National Wildlife Refuge in Colorado, and the Wind River Indian Reservation in Wyoming. Taos became home base when the Bureau of Land Management hired Roberta in 1991.

This work both inspired and upset Roberta. “I worked in many exquisitely beautiful places but as a wildlife biologist it was painful work. It was a nontraditional field for a female and my supervisors frequently told me that I was incompetent and would never advance in my career. Even worse, I was ordered to senselessly kill wildlife or spray open wildlife waters with herbicides. That aspect was a nightmare,” Roberta recalls. “Even in my field people were disconnected from the Earth.” When her husband encouraged her to follow her heart, Roberta left her government career. She realized that she wanted to spend her life helping people honor and celebrate the Earth through experiential learning in nature.

In 1999, after 17 years of working for the federal government, Roberta founded Rivers & Birds, a non-profit that provides experiential education adventures. This new venture combined her professional expertise with her passion for nature and her cultural roots. Rivers & Birds’ mission is both to celebrate the interconnection of all life and to foster earth stewardship and peace.

Roberta is the first to admit that in the beginning, she felt totally unprepared for this new challenge. “I needed money for buses and equipment. Fortunately, I bumped into John Otis who helped us establish Rivers & Birds as a non-profit organization, and suddenly the ball was rolling. Every step of the way, I felt like an unseen force was working to make Rivers & Birds happen,” adds Roberta.

Under Roberta’s direction, Rivers & Birds serves the Taos community in a variety of ways. For young people, Rivers and Birds offers an annual 9-day Watershed Learning Project program for 5th graders and an environmental teen leadership program. Today Rivers & Birds has taken more than 3500 public school students through a nine-day nature immersion program focused on how water connects all life. Children of all abilities thrive in this program. Rivers & Birds was honored for this work as New Mexico Environmental Organization of the Year by the Santa Fe Community Foundation. Rivers & Birds has mentored many Taos teens and taken them to meet Nobel Peace Laureates and the Dalai Lama. In 2004, Rivers & Birds received the Peace Cereal Award on International Peace Prayer Day. The organization has also helped a powerful female youth, Rivala Garcia, launch the Rivala Fund for Trees which has now planted more than 350 native trees in Taos County.

Roberta notes, “My work came full circle in 2009 when a gifted young woman who was in my first group of students, Claire Cote, came to work for Rivers & Birds as an environmental artist and educator.”
Rivers & Birds was also awarded the 2004 NM Governor’s Film Cup Award for its ‘Nuestras Acequias’ documentary film. This was part of the organization’s all-ages education effort, which also includes evening seminars and hands-on workshops, environmental awareness events, community film screenings, environmental art and photography opportunities and exhibitions. Rivers & Birds also sponsors guided educational hikes and river trips for all ages, including an annual field-based bird song identification workshop, and a local Taos geology outing. For six years, Rivers & Birds produced a much-loved International Wildlife Film Festival in Taos and an ongoing Eco Film series. She has taught bird identification to professional biologists and amateurs.

Last year Roberta was honored as a National Wilderness Hero by the Pew Charitable Trust. She is now working with other Taoseños to permanently protect the Columbine Hondo Wilderness. “Each day, I am aware that the land and water bless us with their great beauty. When you step outdoors here you can’t deny that,” Roberta notes. She sums it up saying: “We live on a magical planet. That magic really comes through here in Taos County. It’s more important now than ever to honor and celebrate the Earth. By celebrating our Earth with others through outdoor experiences in nature, we honor life in a way that’s joyful and meaningful and connects to the spirit of all life. Teaching the interconnection of all life is key to sustainability.”

Roberta Salazar on her favorite Taos sites and sights: Just about anywhere in Taos is a “favorite place to be”. My home garden, the Rio Grande Gorge, Orilla Verde and Wild Rivers are three places I frequent as well as Latir, Columbine Hondo wilderness and Wheeler Peak wilderness areas in our high Sangre de Cristo Mountains.